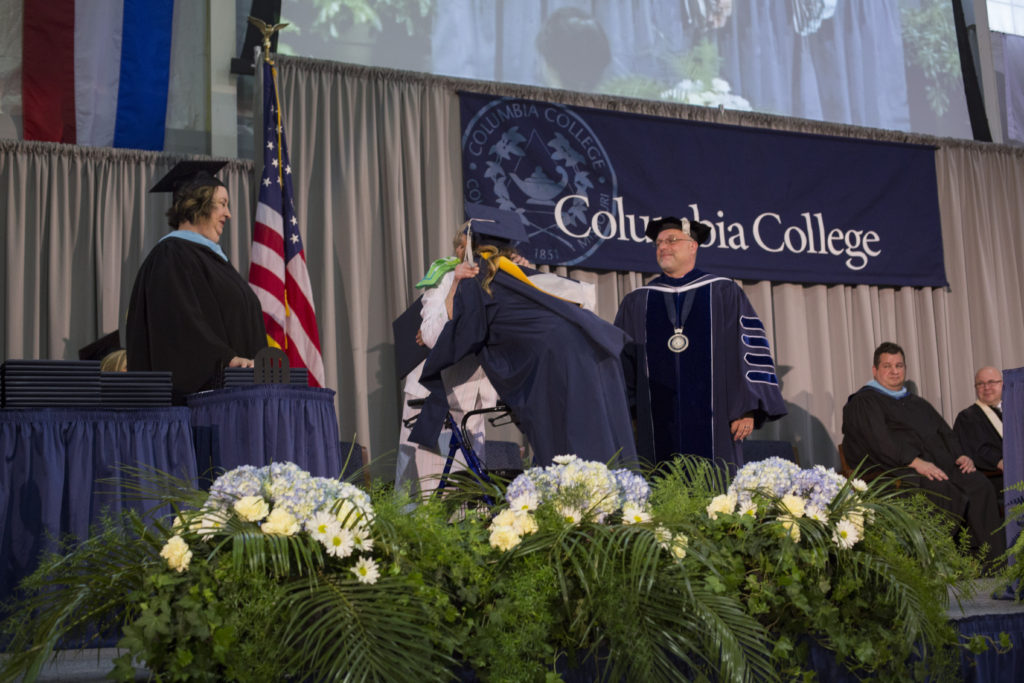 Peggy Lamke Price ’43 has seen plenty of her family members take the traditional route through higher education. Her granddaughter Abigail Price Taylor stands out because she went the “hard way.”

Taylor started at Texas A&M after graduating high school but eventually came back home to Missouri. She enrolled at Columbia College in 2011, as a 28-year-old student, and earned her bachelor’s degree in psychology with a minor in criminal justice in 2013. She started taking classes for a Master of Science in Criminal Justice a week after earning her bachelor’s, all while caring for her 10-month-old son, Julien, with her soon-to-be husband, Michael Taylor.

Price was there to hand Abby her diploma when she graduated from Columbia College-Springfield the first time around. She was there to bestow the master’s degree upon Abby on May 7 at the Southwell Complex during Columbia College’s main campus May commencement as well, giving her a hug and a kiss on the cheek as she walked across the stage.

And a note that read: “As your grandmother, and representing the third of five continuous generations of Columbia Christian College graduates in our family, beginning in 1871 with my grandmother, I have the great honor and privilege to hand your diploma to you, a fifth-generation graduate of the college. It’s the most advanced degree any of us has ever received, and we’re all so proud of you.”

“It just kind of happened. We didn’t plan it that way, of course, but as the years went by, each family individually realized that was the place we would like our kids to go, and they did,” Peggy says. “I’m just really proud of all of them.”

Abby was one of the 495 Columbia College students, representing 28 states and 21 foreign countries besides the United States, to earn their degrees during the college’s two commencement ceremonies May 7. The commencement speaker, Apple Inc. executive Vin Capone, stressed the importance of perseverance even when faced with long odds, such as the moment his dreams of playing college football ended with a serious spinal injury in high school. Columbia College President Dr. Scott Dalrymple echoed that sentiment in his remarks.

“We provide the opportunity for people to change not only their own lives, but the entire trajectory of your family for many generations,” Dalrymple said. “I’m proud of you. And people you haven’t even met yet, who haven’t even been born yet, will be proud of you, too.”

Abby says she made the choice to resume her schooling at Columbia College on her own, because the staff at the Springfield location made her feel like more than just a number. That sentiment was reinforced when, after Abby took some time off following Julien’s birth, location director Kathy Gress and enrollment assistant Holly Canady helped her stay on course for her bachelor’s degree.

“They would hold him and walk him around the hallways of that building wailing so that I could take tests,” Abby said. “Things that you would think you would call a friend for. They just knew what I was going through and they offered and showed up.”

Abby wants to use her master’s degree to get into criminal justice administration, and she is hoping to land an internship with the Greene County courts.

She remembers her first graduation because her father, Rick Price, was able to attend. He died less than a month later after battling kidney cancer. She’ll remember her second graduation because, even though Rick couldn’t be there, Peggy could.

“Aside from my husband, she’s my best friend,” Abby said. “I don’t mean that as a blanket term. She really is. I can talk to her about anything, without judgment. She’s just always been my biggest cheerleader, aside from my dad.”

Abby’s 7-year-old niece, Lily — Peggy’s great-granddaughter — was also in attendance for the commencement ceremony. Abby wanted to serve as a reminder to Lily that the women in her family “do things.”

They’ve already been doing so for at least five generations.

“I was so thankful for (Abby’s) grit, her tenacity, and the help that she got from the college,” Peggy said. “I think we were just so pleased with everything, with her approach and determination.”