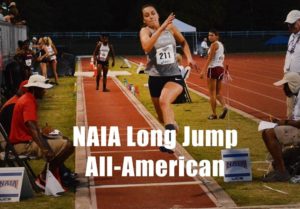 She came as an aspiring biology major and forensic scientist, one who had last participated in the high jump during her sophomore year at Washington High School in Washington, Missouri, in 2013, when shin splints and a broken ankle compelled her to put her athletic career to the side.

As luck would have it, though, the college was just launching a full men’s and women’s track and field program last fall to complement the distance running component it had cultivated with the start of its cross country teams in 2012.

Stricker emailed Cougars coaches Tim Cornell and Tracy Jex to see if they’d be interested in her coming out for the team. In March, Stricker finished sixth in the long jump at the NAIA Indoor National meet, becoming the first field All-American in program history. She built on that success during the outdoor season, finishing second in the long jump at NAIA Nationals on May 26.

Not bad for a biologist.

“I honestly wouldn’t have done it if it wasn’t the first year, because I knew they didn’t have a lot of people and they were just trying it out to see how it would go,” Stricker said. “I thought it would be fun to try it again.”

Stricker’s experience is emblematic of an exciting period of expansion for the Columbia College athletic department, one that will witness the college greatly expanding its opportunities to attract new students to campus.

After a trial run during the past school year, the men’s and women’s track and field teams will be ready for a full competition slate this fall. They’ll be joined by a baseball program being revived after more than 30 years on hiatus and a scholarship eSports team, one of the first of its kind in the nation. Columbia College has also announced plans to add women’s bowling and men’s lacrosse by the 2017-18 school year, bringing its total number of NAIA Division I sports offerings to 17.

Athletic director Bob Burchard said the college could be drawing as many as 100 more student-athletes on an annual basis at the end of this round of expansion than it did before.

“Like most departments, we are a reflection of what’s happening within the college as a whole,” Burchard said. “It’s nice to grow from a position of strength. If you’re doing that, you can be highly selective and purposeful and planned in your strategic growth.”

That allowed Burchard and other athletics administrators the latitude to scout possible areas of expansion. Men’s lacrosse is an “emerging sport” in the NAIA that held its first invitational national championship this year. Burchard expects it to be a full championship-level sport nationally by the time Columbia College’s program is up and running. Women’s bowling is also one of the fastest-growing collegiate sports in the country, Burchard said, and similar institutions such as Missouri Baptist and Lindenwood-Belleville have successful programs.

Both sports have a dedicated following in mid-Missouri. Same goes for baseball.

Munns knows what he’s talking about. A Mexico, Missouri, native and Columbia resident, Munns comes to the college after coaching the past 10 years at American Midwest Conference rival William Woods in nearby Fulton, a span in which he posted a 333-183 record. He said he hopes to have 35 to 40 players on board in his new program by the students report to campus in August.

He’s already secured commitments from 37. Burchard and Munns both feel as if that constitutes being ahead of schedule.

“The ingredients that have been very helpful are it’s a great school, the athletic department has a tremendous reputation, and it’s a great college town,” Munns said. “Once you get them on campus, you don’t really have to do a whole lot more, because this is a great place to have a recruit and family visit.”

While the lacrosse team will play at the recently remodeled R. Marvin Owens Field on campus, the college will partner with the city of Columbia to set up venues for the baseball and bowling teams — baseball at nearby Atkins Field and bowling at a local alley. It’s the same sort of arrangement that has worked well for the softball team at the off-site Antimi Sports Complex, Burchard said.

“We know we have historically great academic programs to attract students, and I think students are always looking for the second reason to participate,” Burchard said. “It’s attracting students who might not otherwise be interested in Columbia College for that other reason to be here and to be active and do things that they’re passionate about.”