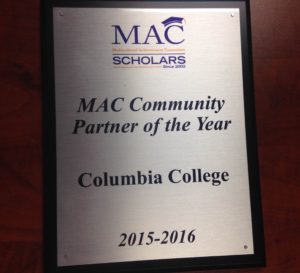 Some students need to be reminded that college isn’t such a scary place after all.

It might seem that way, especially if you’re the first in your family with the opportunity to go to college. It might seem foreign, overwhelming, intimidating. But, the more you can expose yourself to life within the college framework, the less daunting it will probably feel by the time you finally set foot on campus.

The MAC Scholars program is focused on providing historically underrepresented students with more numerous and varied educational outlets from elementary school through high school with the hope that, by the time college enters their thinking, they’re well-prepared to pursue an advanced degree. Columbia College has been one of MAC’s most active partners in the community over the past few years, hosting multiple events on campus with the aim of exposing area students to higher education.

Because of those efforts, the MAC program named Columbia College the 2016 MAC Community Partner of the Year during a gala at Hickman High School on May 10. Dr. Jeffrey Musgrove, vice president of the college’s Adult Higher Education division, went to the event thinking he’d just be presenting an award.

He didn’t know he’d be accepting one as well.

“We want to involve our community leaders, especially our community leaders of color, so our students can see what success looks like, and they can see themselves in those individuals,” Whitt said. “The thing that I love, I have to say that I think Dr. Musgrove is just a phenomenal person. He’s a futuristic thinker. He thinks outside the box, inclusive by nature.”

Kimberly Craig, the events manager for the Columbia College Admissions department, described the college’s involvement with MAC as a three-tiered process. First, admissions hosts a group visit with MAC participants once or twice a year, in which students can come on campus and take part in guided tours and learn a little bit more about Columbia College. Second, the college started hosting the MAC conference last year and will do so again Oct. 21, expecting to draw 300-500 people to campus. Finally, MAC holds a portion of its yearly Summer Expeditions camp and the entirety of its Honors Summer Academy on Columbia College’s campus.

Summer Expeditions is a four-week program for rising fifth graders, with the final week taking the form of an immersion day camp at Columbia College. The Honors Summer Academy is an overnight camp that runs eight days for rising 10th graders.

“They’re such a fantastic group to work with and the students are wonderful, smart, bright and excited about their futures,” Craig said. “We get to help shape that a little bit, and provide these students great opportunities to be on campus and see what college is like. That’s really cool.”

Dr. Terry Smith, professor of Political Science at Columbia College, teamed with former CPS superintendent Chris Belcher to bring Summer Expeditions on campus six years ago. The elementary school students who attend go through a week’s worth of lessons with college faculty and “graduate” at the end of it, earning a certificate of achievement. Summer Expeditions runs from June 6-30 this year.

“Historically, I’ve dressed up in my cap and gown and made it very formal,” Smith said. “We get some people on campus that otherwise wouldn’t be. When we have the graduations, parents take off work to come. It’s a big deal.”

The Honors Summer Academy is entering its second year at Columbia College after moving over from the University of Missouri. It started as a five-day, morning and afternoon camp last year and has already grown into an eight-day overnight camp that will run from June 23-July 1 this year.

“We’re seeing the kids feel like the college is a friendly environment: ‘I can do this,’” said Dr. Teresa VanDover, associate professor of Education at Columbia College. “That seed being planted early on, there’s nothing to replace it.”

It’s a partnership that enhances both sides and will continue to do so.

“We look for individuals or organizations who have helped us to break down some of those barriers to access,” Whitt said. “(Columbia College) truly has been a partner that has really helped us to build opportunities for our students.”