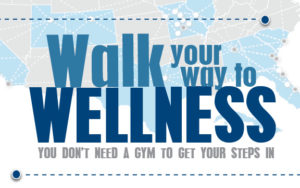 Over the course of nearly 10 weeks, 239 members of the Columbia College faculty and staff walked around the circumference of the earth three times.

Not literally, of course. Who has enough vacation days for that? Or the requisite ability to walk on water?

But, from March 21 through May 27, the participants in Columbia College’s inaugural Walk Your Way to Wellness competition logged a total of more than 148 million steps, or about 74,047 miles. The average competitor took 619,870 steps over the course of the challenge, 97 logged more than 680,000 steps — more than 10,000 per day — and 27 eclipsed a million total steps.

Bryan Curtis, the college’s coordinator of student recreation and intramurals, and the other members of the Staff Association Advisory Council’s wellness committee thought that, with a good and energetic turnout, competitors may be able to log the miles needed to walk around to all 35 of the college’s Nationwide locations.

“The top numbers were absolutely incredible,” Curtis said. “One of the things I really enjoyed watching was the different groups of people that would walk. I heard of groups that had walking meetings, or people who were taking their break and, when they would normally just be sitting in a break room, maybe they’re going over to the gym to walk on the treadmill a little bit.”

Daisy Melendez, an administrative assistant at Columbia College-Orlando, was the wire-to-wire individual winner, putting up a grand total of 2.75 million steps that equated to more than 40,000 a day. She and Rochelle Hamm (2.43 million steps), an assistant athletic trainer at the main campus, both earned top individual prizes of $250. Competitors could also participate in teams, with the group that logged the most steps per walker at the end netting $75 per member.

Before the competition began, Curtis estimated he’d see figures in the 160,000 range at the top of the leaderboard for the first week. Melendez came in at 283,107. The next week, she ratcheted it up to 330,257.

Melendez got to work early to get in some steps. She’d walk during her lunch break. She’d walk when she got home from work. She even kept up a consistent pace of stepping in her office during work until some students suggested she cut it out.

So she just found more time to walk when she wasn’t at her desk.

“I guess, all of a sudden, I became competitive,” Melendez said. “That’s so not my nature. But when this came along I was like, ‘You know what? I’ve been wanting to get off my butt, so to speak, and do something.’ And this was the greatest thing.”

At the main campus, the members of “Blood, Sweat, and to be Feared” — a self-proclaimed “dream team” — watched as Melendez built an insurmountable lead on the individual field. Even so, they felt they had a puncher’s chance at the team competition because de facto leader Mara Roberts set a pretty high bar for admittance: 15,000 steps a day, or you can’t roll with us.

It was an especially bold gambit considering Roberts could only log about half that at the beginning of the competition as she recovered from surgery to repair a torn ACL in her left knee at the end of February.

“By Week 3 or 4, my competitive side got the better of me and I was maxing 15-20,000 steps a day,” said Roberts, special assistant to Provost Dr. David Starrett. “I still haven’t admitted this to my physical therapist.”

Wayman, who has a treadmill desk at her home and a standing desk at work, was in line for the $250 second prize until Hamm eclipsed her in the final three weeks. Wayman says Hamm has promised to take her out to lunch to make up for it.

“She told me she was going to use the money to pay off her student loans. I’m beyond student loans. She needed that worse than me,” Wayman said with a laugh. “It was a fun competition. I think, for staff morale, it was wonderful. I was waiting for those numbers to come out every week, just like everybody else was.”

With such a successful debut, Curtis says the wellness committee plans to repeat the competition next year with a few tweaks. Roberts hopes that the entire Columbia College community can use the step challenge to see how intrinsically competitive and motivated the college’s representatives are as a group and what everyone can accomplish if they’re working toward the same goal.

And that the committee doesn’t enact some sort of legislation to split up her dream team.

“We’re all in our individual pockets, but we are a team,” Roberts said. “And Team CC, across the entire country, we circled the earth three times over the course of 10 weeks.  I would love to start to see more teams that are (multi-location). I would love to see more of that working together, as we realize they might be different, but (everyone has) benefits that they bring to the table.

“I’m already thinking of snagging Daisy next year and putting her on my team. I’m sure there are lots of teams that want to recruit Daisy.”

Error: API requests are being delayed for this account. New posts will not be retrieved.