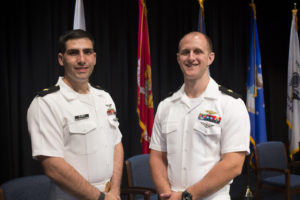 Street performing just was not offering Dustin Beckwith the sort of fulfillment he desired. While he was a talented juggler who could also make a yo-yo perform complicated maneuvers, Beckwith yearned for more.

“Apparently, the market for that in Lubbock, Texas, wasn’t very good,” Beckwith said. “I was looking to do something more serious with my life. One day I went into the (Navy) recruiting station, and I haven’t looked back since.”

Beckwith has been in the U.S. Navy for the past six years. A couple years into his service, while stationed at the Naval Air Station in Lemoore, California, Beckwith started his higher education career at the Columbia College location on base and ended up earning an associate degree. That’s one of 18 Columbia College locations that are on military installations.

When he was selected to the Navy’s Seaman-to-Admiral program earlier this year, he had a pretty good idea where he wanted to continue his schooling.

“I started my college career with Columbia College, and they’ve always provided the best support,” Beckwith said, singling out NAS Lemoore location director Betsy Quade for her help. “The Navy said I could pick any college that I wanted to go to, and Columbia was at the top of my list.”

Columbia College and its crosstown Naval ROTC affiliate the University of Missouri are the only schools in the state of Missouri that the Navy lists as hosts for its STA-21 (Seaman-to-Admiral) program, which serves as a gateway for enlisted servicemembers to become commissioned officers through the receipt of a college degree and completion of the program. All branches of the US military have similar scholarship programs.

The Navy offers its servicemembers a chance to remain on active duty at their current pay grade while adding in up to $10,000 a year to help cover tuition, books and fees.

“This is their full-time job, and their lone requirement is go to school,” said Tery Donelson, senior director of programs and partnerships for the Columbia College Division of Adult Higher Education. “It’s a pretty popular program. Usually these are older, more focused students, so they are attracted by our smaller class sizes and tenured professors actually teaching our programs.”

Donelson said Columbia College attracts students from all of the military branches through these types of programs, ones that have often already begun their education at one of the college’s locations and seek the smooth transition to the main campus and its ROTC courses, which are conducted just across town at the University of Missouri. Two of this year’s STA-21 students —the 26-year-old Beckwith and Corey Ring, 27 — took in the college’s ninth annual Military Recognition Day festivities May 26.

Ring, a native of St. Peters, Missouri, has been stationed in San Diego for the past nine years and started taking Columbia College online classes to supplement his coursework at Coastline Community College in Fountain Valley, California. A history major, Ring said Columbia College made transferring academic credits from a variety of sources simple.

“I liked what I saw in the online campus, I liked this grant. I knew it was going to be an easy transition,” Ring said. “I thought, ‘Hey, if the Navy recognizes Columbia College as a good school, then it won’t hurt me.’”

Donelson took part in the Air Force’s scholarship program when he was an enlisted servicemember. He has first-hand experience with the process as a student, as well as seeing how the decades-long partnership between the military and Columbia College has benefitted students such as Beckwith and Ring in the past.

“Sailors, Marines, soldiers, airmen can come here for those military programs, do their college work at a small, private, liberal arts school and still go through the ROTC program,” Donelson said. “It’s beneficial. Columbia College and the University of Missouri ROTC programs are a very good partnership for both entities.”