Nollie Moore: Music, work and finding a better version of himself 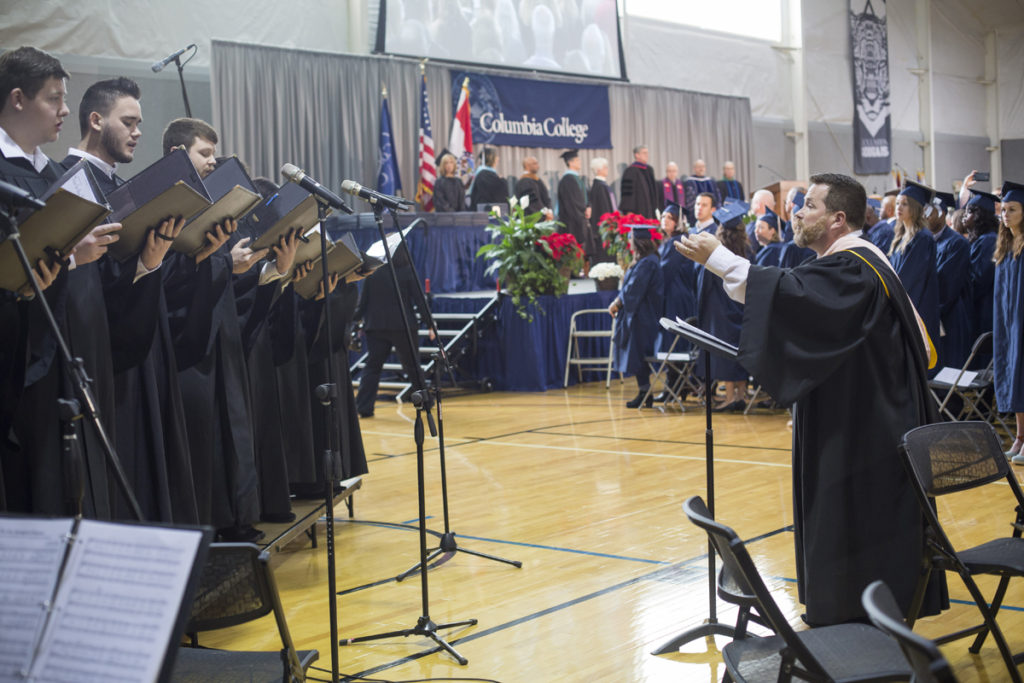 If you’re walking across campus with Nollie Moore, you’d better walk fast. As the college’s instructor of music and director of the Jane Froman Singers, Moore is constantly on the move.

From rehearsals to voice instruction, teaching class, being a dad to his two sons and husband to his wife, Julia, the Jackson, Missouri, native squeezes the most he can out of every minute of every day. With an additional caffeine boost, Moore notes that his drive and determination come from a daily search for a better version of himself.

“From the very beginning, I have always had this desire to be the best that I can be at whatever it is,” Moore says. “Every day is an attempt to get a little farther down the path than I was yesterday. I don’t think it’s a completely healthy thing, to be honest with you; however, it is what drives me. I am constantly looking for the new and improved version of me.”

While this juggling act may sound exhausting, Moore, who has been with the college for more than 18 years, handles it all in stride with a special brand of humor and personality. For his work, he was recognized with the Columbia College Trustees Award for Teaching Excellence in April.

He also has a unique opportunity to work with someone very close to him. His son Logan is a junior at the college and is majoring in music, a degree program Moore and a “huge team” revived in 2014 that continues to grow and flourish.

“From a teaching standpoint, [Logan and I] developed a very professional approach to the process,” Moore says. “It’s a challenge, but it’s also incredibly rewarding.”

In fact, there will be yet another Moore on campus next year, as Moore’s younger son Carter will also be attending Columbia College. He will be majoring in, you guessed it, music. While recruiting his family to come to Columbia College was not a huge challenge, Moore believes that the college’s music program offers the students unique performance and professional opportunities they may not receive at a larger institution.

“I feel very strongly that students will perform at a level and a frequency far beyond what their peers would get at a larger school,” Moore says. “I really believe that is one of the things that defines this program. It makes it a challenge and a lot of work, but if experience is what you are needing, I think it’s really important.”

Moore also challenges himself to be a better instructor for his students. “I push myself to remain active as a performer in both solo and theater work,” Moore said. “I hate that old saying, ‘Those who can’t do, teach!’ The best teachers do. The best teachers lead by example.”

Moore truly turns that saying on its ear as a great example for his students. In fact, Moore was named the Best Solo Vocalist by Inside Columbia magazine in 2015. He also made his solo debut at Carnegie Hall in May 2015, singing the tenor solos for A High, Lonesome Bluegrass Mass by Wes Ramsey and Tim Sharp. This April, he sang the same work at The Ryman Auditorium in Nashville, the birthplace of bluegrass and home to the original Grand Ole Opry. Also, this summer, he has joined the professional casts of Oliver! and 1776 at The Arrow Rock Lyceum Theatre in Arrow Rock, Missouri.

He does need a few moments away from it all, though. When asked what music he listens to in the car, he instead shares his deep appreciation for silence while he drives.

“To be completely honest with you, I think people would be surprised to know that I listen to zero music in my car,” he says. “When I am not teaching, I prefer silence. I hear music all the time, so silence for me is an escape. Other people escape to music, for me, I escape to silence.”

So what does Moore do for fun? The response should not surprise those who know him. Other than relaxing, treating himself to Thai food and spending time at home, “apparently work,” he says with a laugh. “I am fortunate enough to have a job doing what I love to do the most, which is create art.”