With the correct techniques, you can make a chair out of cardboard that’s strong enough to hold the weight of an average adult.

You use physics to figure out how to account for the natural forces at play. That’s where science comes 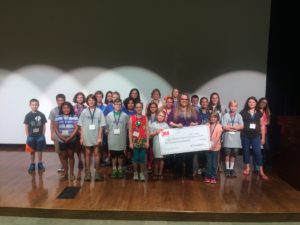 in. You need the technological know-how to execute a design for the chair using 3-D computer modeling. You need the engineering capability to construct a testable prototype. You need the artistic vision to visualize how all the necessary components combine into a harmonious whole. And you need the mathematical chops to calculate the specifications your chair must meet in order to work.

You take the first letter of all five of those disciplines and you get “STEAM.”

The 24 students at Columbia College’s inaugural STEAM Camp from July 11-15 got to put their full spectrum of knowledge to work in creating furniture out of cardboard. The groups of campers, all of them fifth- through eighth-graders, then presented their projects in a closing ceremony at the Brouder Science Center on July 15.

And you know what? The chairs worked.

“We call that ‘functional art,’” said Dr. Ann Schlemper, professor of Mathematics at Columbia College and one of the camp leaders. “They’re, art and you can sit on them and they don’t break.”

Traditionally, educators stress the “STEM” disciplines for developing students: science, technology, engineering and mathematics. Recently, though, there has been a bigger emphasis placed on how art intersects with the other four subjects.

“Creating art involves aspects of STEM. It is logical and advantageous to add ‘A’ to add depth to the overall vision to further develop ideas of critical thinking and creative problem solving,” Bedilion said. “The combination of the aesthetics of art and practicality of STEM leads to thoughtful, interesting and beautiful discoveries.” 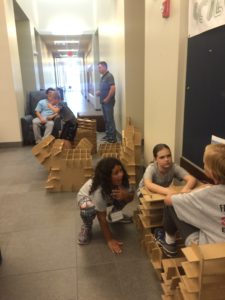 The cardboard chair project is actually something Bedilion does with college students in his 3-D design class. It’s just one of the activities in which the campers took part during the week.

They learned the basics of programming on a Texas Instruments Innovator calculator, setting the code to make a light blink on and off and music play from a TI hub. They took a field trip to EAG Laboratories in Columbia to see professional scientists at work.

EAG and the Columbia College and Columbia Public Schools’ Partners in Education coalition each footed the bill for two scholarships to the camp, 3M provided a $2500 grant, and Midway USA supplied the cardboard and $250. Texas Instruments, Staples and Fast Yeti Tees also helped provide supplies and discounts on merchandise.

Schlemper said she was encouraged to see so much community interest in the project, along with the fact that female campers outnumbered male campers by a 2-to-1 ratio.

“We find that high school students who know that they only need three math classes or two science classes, sometimes they take the minimum,” Schlemper said. “We want to reach out to the middle school students who haven’t even gone to high school yet and get them excited about these fields and see what it’s like to be a scientist, a mathematician, an artist or an engineer.”

She’s hoping to expand the camp through increased grant money. Maybe offer more spots for campers or provide a camp for prospective STEAM teachers earlier in the summer who would then go on to tutor younger campers for a week later in the summer. Nearby Jefferson Middle School is becoming a STEAM-focused school, Schlemper said, so there should be plenty of opportunities to partner up.

The future’s bright. So bright, in fact, that Schlemper and her cohorts are already kicking around the idea of making light sculptures the main project for next year’s camp.

“It was hands-on, very discovery-oriented,” Schlemper said. “They worked in groups, so they had to learn to collaborate and compromise.