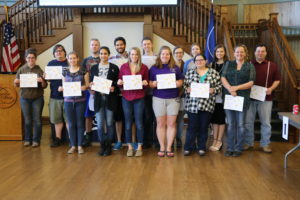 From its two-story house headquarters on 10th Street in Columbia, the staff at Columbia College’s Student Support Services program helps make the transition to college life easier for students who might otherwise have a hard time.

Student Support Services (SSS), funded as one of the US Department of Education’s federal TRiO programs with Columbia College administering the grant, is for main campus students who have documented physical, learning or mental health disabilities; meet income guidelines specified by the government; or have no parents or legal guardians who have graduated from a four-year college or university.

That may give some the indication that SSS recipients lag behind the rest of the student body when it comes to academic achievement said Nancy Lombardi, director of the program at Columbia College.

“We are not a remedial program,” Lombardi said.

The program assists 160 students and, according to the 2014-15 report it prepared for the Department of Education, 97 percent were in good academic standing, 84 percent returned for a second year of schooling and 59 percent graduated with a degree within six years. SSS has been at Columbia College since 2001 and doles out a total of $46,000 worth of grant aid per year. The program received a $1.15 million grant from the Department of Education in August 2015 to fund it through 2020, the third time the college’s grant has been renewed.

“The biggest thing I think we do for them is getting them connected to Columbia College,” Lombardi said. “Helping them not be hesitant to go there and seek those kinds of things out. And, also, the most important thing is their relationship with their advisor. It’s a personal one-on-one. They have a person they know that they can go to and talk with about anything.”

Lombardi and the other SSS advisors — Tina McNeil, Amy Rigg and Andy Upham — help guide students through the different stages of their college careers. Upham helps new students transition into life away from home. Rigg works with the juniors, auditing their transcripts and making sure they’re doing everything they need to be on track to graduate.

“This last year, I felt like I could go to Amy with frustration I’m having with a class, or things like that,” said Allison Krieg, a rising senior and first-generation college student from Greenville, Illinois, who is majoring in English with a creative writing emphasis. “That’s really important, that they’re there for more than academic support.”

They take a formal approach to connecting with students through services such as tutoring and workshops as well as an informal approach through outings to cultural events such as a Chinese New Year festival at the Nelson-Atkins Museum of Art in Kansas City and taking in a Broadway musical at the Fox Theatre in St. Louis.

SSS also sponsors a mentorship program each fall, coordinated by McNeil, in which students who have had a chance to go through their freshman year at Columbia College turn around and help the classes coming behind them.

“College is very stressful. If they were feeling overwhelmed, I wanted them to be able to go to someone with whom they could talk it through,” said Krieg, who served as a mentor last fall. “For those who come here without anyone, all the orientation things they put on are really important to make connections, because it’s a big transition. I don’t think anyone should have to go through it without knowing anyone.”

The results have been spectacular. A number of former SSS students have gone on to pursue their education even further after graduating from Columbia College. Domonique Cisneros ’08 and Brenda Crosby ’09 both earned master’s degrees in criminal justice from New Haven University and currently work for the Army (Cisneros) and the St. Louis Metropolitan Police Department (Crosby). Brittany Brazzil ’12 recently received her doctorate in physical therapy from the University of Missouri, and Maranda Hartze Pithua ’12 was hired as an occupational therapist at the Missouri Psychiatric Center after earning a master’s from the university.