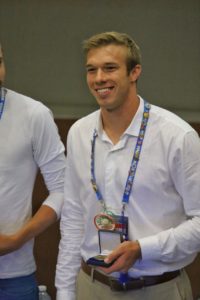 Zach Rockers, with the medal his group won for a presentation at the FISU Forum in Montpellier, France. (Submitted by Zach Rockers)

Pocket dictionaries are valuable resources when you’re traveling abroad, but they can also be obstacles to normal conversation.

Columbia College alumnus Zach Rockers found that out the hard way on his first trip overseas, making the jaunt to Montpellier, France, for the 13th international FISU Forum on university sports from July 4-9.

“When you get over there, you don’t have time to take it out and try to figure out how to butcher a pronunciation of the French food that you’re wanting,” Rockers said. “So I did a lot of pointing.”

Rockers, who earned his bachelor’s degree in business and education last year and his Master of Arts in Teaching in May — both from Columbia College — was a standout basketball player and golfer during his athletic career with the Cougars. He put those experiences to good use at the forum, where he was one of only two American representatives that joined college-aged athletes from 59 other nations to discuss the current state of the sporting world, as well as what lies on the horizon.

He even learned a little French along the way.

“It was just frustrating that you couldn’t communicate with people like you could here. I love talking to people,” Rockers said. “It was cool whenever I met somebody that could speak English. I’d go and just talk their ear off. I probably got on their nerves.”

Learn more about Rockers’ trip to France in the latest CC Focus!

CCC: How would you describe the FISU Forum?

ZR: It’s basically they bring the world together and we talk about sports. We talk about issues that they wanted athletes’ input from around the world on how to deal with some things. Like gender equality. Compared to the other nations — I’m not saying we’re perfect at all — but we have a pretty strong system. I kind of explained Title IX and how we have an equal amount of money and athletic teams for men’s and women’s sports at different universities. A lot of people thought that was a pretty groundbreaking idea. That was kind of cool to do a presentation on that. Our group actually won the whole presentation, got a gold medal and everything. But there were other topics: anti-doping, leadership, how media plays a role in our different nations in college sports.

CCC: What was it like working with athletes from other countries?

ZR: We got along great. I guess it kind of gave me a little bit of hope that, you know what? We’re all people. Even though we do have differences and there is some craziness going on in the world right now, that week that I got to spend with them really proved to me that we all have a lot more in common than we do different. I’ve got great friends from all over the world now. Different countries, different backgrounds and all that. It was a very hopeful, uplifting experience to show that there’s a lot of good all around the world. We’re kind of all in it together. And sports, I really see it as a blessing and a gift to bring people together and get to share something in common. 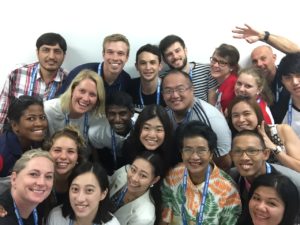 Zach Rockers with other participants of the FISU Forum. (Submitted by Zach Rockers)

CCC: Did you get singled out because you were American?

ZR: I felt like I almost had a lot of responsibility. I did take it very seriously. I wanted to represent a nation that I love really well. I don’t say this in a bragging or arrogant way, but whenever I went up and introduced myself, people’s eyes kind of lit up. Everybody just seemed to be drawn to the American. They wanted to know about sports, pop culture, our election. It’s like they were just so hungry for what we had. Not to take away anything from what they had, but everybody just wanted to know, “What’s it like in America?”

CCC: How do you plan on learning from this experience?

ZR: My biggest takeaway is how people from all different backgrounds came together. We had so much in common and there was so much good that went on. It was such a joyful, uplifting, fun-loving experience that we got to all come together and get to really be united. You look at the whole world in general but even in the United States or in your community, your family, there are going to be some differences. Some might be bigger, some might be smaller. But in the end, we’re all wonderful creations of God. And just how I really got to experience firsthand how we all can get along so well. We can make this work and, not only make it work, but all thrive together. I think it’s really important to find common ground. At the conference, our common ground was sports. But there’s common ground in a lot of different things that people are passionate about.

CCC: What’s up next for you?

ZR: I’m going to be a religion teacher at Tolton Catholic High School (in Columbia). I’m going to get to teach all the freshmen there. … I’ve had five years at Columbia College. Love that place to death. If I could stay longer, I would. But I think I’ve gotten as many degrees there as I can. I have to move on to the real world. I’m really excited to still be in Columbia and still stay connected as an alumnus, still go to all the sporting events. Now I get to give to the college as much as I can. The college has been so good to me, so it’s good to have an opportunity to give back and support the school in another way.