Dr. Shanda Traiser yearned to get back into the world of higher education. 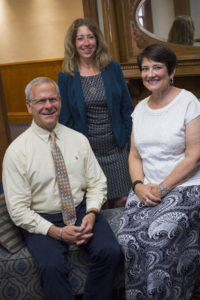 She had been a founding dean of the Gary Tharaldson School of Business at the University of Mary in Bismarck, N.D., before becoming the director of strategic planning at Basin Electric Power Cooperative in Bismarck.

She felt at home in academia. Columbia College caught her eye.

“I really missed higher ed. I feel like that’s my true passion,” Traiser said. “I liked what I saw from a community standpoint and then, from the college, that they seem very innovative and open to new ideas and are not an institution that seems like they’re stuck in ‘That’s the way we’ve always done it.’ That’s appealing to me.”

Traiser is bringing her wealth of business and education experience as the new dean of Columbia College’s School of Business Administration. She joins Dr. David Roebuck and Dr. Sarah Vordtriede-Patton as the founding deans in Columbia College’s three-school academic structure, which takes effect for the 2016-17 school year. Roebuck heads the School of Humanities, Arts, and Social Sciences and Vordtriede-Patton leads the School of Natural Sciences & Mathematics.

Roebuck, a longtime Political Science professor at the college, is shifting roles. Traiser and Vordtriede-Patton are still figuring out the campus map after coming on board over the summer. All are committed to using their positions to help shape Columbia College’s future, unifying the home campus with the Nationwide locations and Online Education students under three schools.

“It really gives us the opportunity to move towards a vision of being one college,” Roebuck said. “We made the conscious decision to move in that direction, and this is the thing that gives us that opportunity.”

As the only in-house hire, Roebuck got to roll out the welcome wagon for Traiser and Vordtriede-Patton as they made their transitions to Columbia. That took on a number of different guises, from Roebuck serving as a campus tour guide to him and his wife opening up their home for Traiser and Vordtriede-Patton to stay in while they were looking for housing of their own.

Now, they all work in the same hallway on the third floor of St. Clair Hall.

“We’re going to be a great team. They’re both going to bring in fresh ideas and look at everything we do with new eyes,” Roebuck said. “I like the idea of making things more effective and more efficient. So anything they identify that we’re doing that they think we could do better, I’m certainly in favor of that.”

The goal is for the deans to provide additional perspective and oversight for quality of academic offerings, as well as redistributing job functions from department chairs and the provost and vice president for academic affairs Dr. David Starrett to more appropriate locations within the newly formed schools. Creating an academic leadership team will help chairs and faculty focus more on classes and students. It will also help Starrett focus the institution on initiatives to enhance quality and consistency of academic programs at Columbia College.

Vordtriede-Patton served as the interim dean for two years at the College of Arts and Sciences at St. Ambrose University in Davenport, Iowa, where she spent the past 15 years before coming to Columbia. The Highland, Ill., native is an entomologist by training.

“The big thing is there’s over a million species of insects. So you can find an example of almost anything,” Vordtriede-Patton said. “They do almost everything. Ants cultivate fungi as crops and herd other insects, called aphids, as livestock. Truth is stranger than fiction in the bug world, I think. Never a dull moment.”

Vordtriede-Patton gained an affinity for Columbia during an eight-year stint in the Army Reserve, during which she drilled in the city. She and Traiser both bring an appreciation for the needs of Columbia College’s sizable military student population, as Traiser spent the six months before she moved to Columbia teaching MBA courses at military bases in Kaiserslautern, Germany.

“I really gained a lot of respect for the military and military spouses, just seeing firsthand all the challenges they have to deal with and how resilient they need to be,” Traiser said.

The Early Fall Session starts at the end of August. Until then, Traiser and Vordtriede-Patton are working to settle in and acclimate themselves to serving their new institution and the Columbia community.

“It’s a very forward-looking position, through academic programs that meet students’ professional and personal goals,” Vordtriede-Patton said. “We have a lot of great programs. Putting resources into those, advertising those, making sure people know we have them, and then also doing really creative things and anticipating future needs.”

Roebuck’s been here for 20 years. He’s ready for the new challenge.

“I felt like one of the academic officers should have some institutional memory, and I felt like I could contribute that to the college,” Roebuck said. “Talk to anybody who knows me: I love Columbia College. I want it to be as good as it can be.”