Around six years ago, Campus Safety director Bob Klausmeyer started drawing up blueprints for a new home for his department. He was looking for a way to make him and his officers more visible to the Columbia College population, so he envisioned a Campus Safety office in the heart of campus. 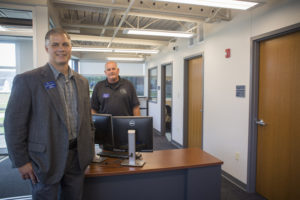 “We were hidden in a small office in Robnett-Spence at one point in time, then in Miller Hall,” Klausmeyer said. “It’s always been difficult to find an officer, so you had to make a call. And a call seemed so impersonal.”

“We got a lot of calls: ‘Where’s the Safety office? Where can I find Safety?’ ” Campus Safety supervisor Brian Wager added.

With the construction of the new Quad, Klausmeyer got his wish. The new Campus Safety office sits in the thick of things, steps away from Dulany Hall and the Alumni Fountain, in full view of the residence halls, a consistent reminder that the 10 Campus Safety officers patrolling the Columbia College grounds are ready to help.

They have your back.

“Officers aren’t just out writing tickets,” Klausmeyer says. “Their true purpose is to just make sure everybody is safe. They’re actually out just trying to be visible. I would like the students to know they can actually go up and talk to the officers and engage them in conversation, just understand that they are available for them if they’re needed.”

Klausmeyer and his staff moved into their new digs on the back side of St. Clair Hall in mid-August, just in time for September’s National Campus Safety Awareness Month. Even though Columbia College is a safe campus, Klausmeyer still wants to make sure students, faculty and staff know what resources are at their disposal should they need them.

The Campus Safety staff is on hand or on call 24 hours a day, seven days a week. There will be two open houses — September 13 and 27 — at the new office over the next month so the Columbia College community can familiarize itself with the staff’s functions.

Officers are tasked with everything from checking the fire safety systems to escorting people across campus, investigating possible suspicious characters on the grounds to administering first aid.

Oh, and unlocking doors when people misplace their keys.

“We’ve always had a safe campus. As far as I’m concerned, we always will,” Klausmeyer said. “My biggest concern is a student who leaves the campus and goes to an area where we can’t watch, where we have no visible presence. That’s when it’s more important, or vital, for them to be aware of their personal safety, and those around them.”

When students do venture off campus, they should always be aware of their surroundings, Klausmeyer says, and try to travel in groups. He keeps in contact with the Columbia Police Department and Boone County Sheriff’s Department to stay up on what areas of town are experiencing the most crime and relays that information to the campus.

The Columbia College Student Government Association, in an effort to educate students about safety, planned a Safety Night on Tuesday, September 6. Klausmeyer informed attendees on self-defense and how to react in potentially violent situations, as well as introducing them to the Campus Safety staff. The program also included training on bystander intervention — knowing when and how to intervene in a possibly dangerous situation — from Columbia College Title IX coordinator Molly Borgmeyer.

“We’ve kind of revamped the whole safety system,” said Logan Moore, a Columbia College senior and SGA executive vice president who helped coordinate Safety Night. “We’ve got new lights, we’ve got cameras in new places. We re-did a lot of stuff, and they need to know about that. They need to know that they are safer.”

The new Campus Safety office is the physical manifestation of that, envisioned by Klausmeyer and greenlighted for construction by the Columbia College Board of Trustees. Klausmeyer also said the college’s Administrative Council — including, but not limited to, President Dr. Scott Dalrymple, Vice President of Enrollment & Marketing Kevin Palmer, Dean for Student Affairs Faye Burchard and Executive Director of Plant and Facilities Cliff Jarvis — provided support for the office through the idea for its specific location, direct encouragement for the concept and the ability to make it a reality.

Klausmeyer hopes the campus community will take the time to stop by and get to know the men and women who are helping keep everyone safe.

“The number one thing that we talked about as student leaders is your approachability, your accessibility,” Moore said. “You walk out your dorm and they’re right there. I think that’s a really cool thing. Very impactful for students, for sure.”