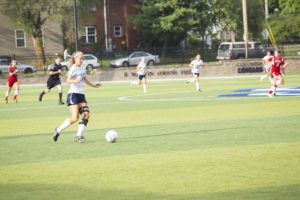 The Columbia College women’s soccer team scored, in coach John Klein’s eyes, “the biggest win” in the five-year-old program’s history when junior forward Laurie Frew’s 94th-minute goal stood up for a 1-0, overtime victory over No. 5-ranked University of Mobile (Alabama) on September 1.

But the tie that came two days earlier might have been nearly as important for the team’s psyche. The Cougars fell down 2-0 in the first half against MidAmerica Nazarene (Kansas) in the season opener before rallying back on goals by Frew and freshman Kelsey Mirts to earn a draw.

“They hung in there and kept fighting,” Klein said. “In the end, maybe that was the best thing. Rather than just winning that game outright, the test of coming down from a 2-0 deficit really gave the girls a lot of confidence. It taught them how to dig down deep to find just that little bit extra.”

Columbia’s off to a 3-0-2 start on the young season, following up the win over Mobile with another 1-0 victory over William Penn (Iowa) University in which the Cougars outshot the Statesmen, 36-4. While Klein still sees room for improvement on his veteran team — finishing some more of those 36 chances on goal, for example — he also feels the Cougars have the experience and chemistry to challenge for another American Midwest Conference title and advance to the NAIA National Tournament.

“Everybody kind of knows what the other players can bring to the field, what they’re capable of, what their strengths and weaknesses are,” Klein said. “I don’t have to do a lot of coaching from the side because the girls know what we want, what we’re trying to accomplish. We just know we want to be the best team on the field and force the issue, play high-pressure and create lots of chances. They’re doing that right now.”

Women’s soccer is one of five Columbia College fall sports teams, including the defending national champion women’s volleyball team, that are in the early stages of their seasons. Read below for quick previews of all five teams. 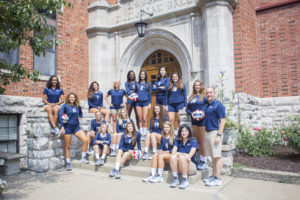 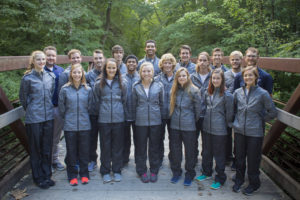