The stereotypical image of a computer programmer — alone in his or her cubicle, writing line after line of code, bathed by the light of the screen — doesn’t really hold up. 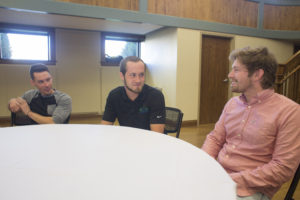 Many who graduate from college with computer science degrees end up in fields that necessitate teamwork on large group projects, or interaction with co-workers from other departments in information technology.

People skills are a big plus. So is networking ability.

Around a decade ago, Dr. Yihsiang Liow, associate professor of Computer Science at Columbia College, started holding yearly functions to help connect some of his new students with upperclassmen. Over the past five years or so, program alumni started coming back to meet current students.

“It’s to start thinking about the future,” said senior Garrett Waage, a computer science and mathematics double major who is currently interning at Veterans United Home Loans. “It’s a good idea to meet other people and see how they’ve gotten to where they are.”

Waage was one of nearly 30 students that lunched with about a half-dozen alumni in Dorsey Gym on Sept. 29.

The event serves an important function for both sides. Students get to see what it takes to make it in the professional world. Alumni get to scout the ranks for possible interns and future employees.

“Sometimes students that come in have only a vague idea of what they would do with a computer science degree,” says Dr. Suzanne Tourville, professor of Mathematics and chair of the Computer and Mathematical Sciences department. “They just think it sounds like a good field but often they haven’t had any real courses in computer programming or anything as students. So to talk to people that have that, and then the possibility of getting internships, is something that they’re glad to know about.”

Three of the alumni in attendance — Michael Hudelson ’10, Miroslav Lukic ’10 and Zach Oppland ’14 — felt an important part of their role was to provide realistic expectations for prospective professionals.

Lukic is the IT director at McNerney Management Group in Columbia, Missouri, and Oppland serves as his assistant director. Lukic and Oppland met through friends at Columbia College and, when Lukic was looking for a second-in-command, he knew Oppland was a person he trusted from the program that had educated him. Hudelson is a software engineer at Columbia-based The Turning Gear, web design and software development start-up he helped found.

It’s OK if you’re not pulling in six figures a year or two after graduating. If you don’t have a job at Google or Amazon lined up immediately, it doesn’t mean that making a career out of programming is not for you.

Success takes many forms. Not all of them end up on the front of Wired magazine.

“A lot of students maybe read about all the stuff out there, but I don’t think it’s that shiny and bright when you come to real life,” Lukic said. “They read about how, if you’re a developer, you can make $100,000 right away. Maybe in certain areas, certain cities, but not everywhere.” 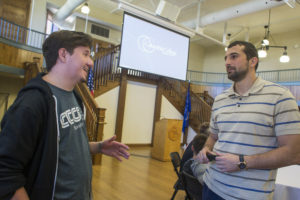 Or if you do have a job at Google waiting for you, like senior computer science major Ryan Frappier, that’s good, too. Frappier interned at Google each of the past two summers and wants to use his experience working for the company to pursue his true passion project. A visually impaired individual, Frappier wants to help create tools for people who have similar conditions.

He says the networking opportunities presented by Columbia College helped open him up socially.

“The first semester I came here, I was kind of timid,” Frappier says. “But Dr. Liow really encourages all the students to be active, and I just got excited by that.”