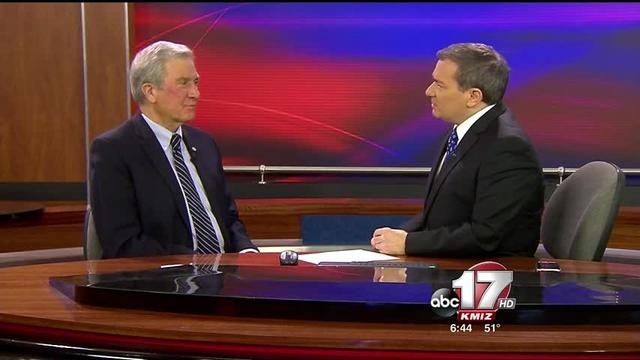 His email inbox starts overflowing. His phone starts ringing off the hook. Media outlets regularly summon Columbia College’s professor of Political Science and resident presidential historian to lend some context to the proceedings.

With the abnormality and contentiousness surrounding this year’s contest between Democratic nominee Hillary Clinton and Republican nominee Donald Trump, he’s been a busy man.

“Only daily,” Smith said, when asked how often he fields media requests. “Just a very heightened level of interest by everybody.”

In addition to regular radio segments on Columbia-based stations KBIA and KFRU, Smith’s analysis has appeared on TV stations KMIZ, KOMU and KRCG, as well as on the Missourinet website and in the Kansas City Star newspaper.

Smith has seen increased interest among his students at Columbia College as well, and he is encouraged by the amount of civic participation he’s seeing.

Even if it is starting to wear on some of them.

“I was at the SGA town hall meeting and one of the students said, ‘Please tell me that this election is totally unique and that we’re not likely to see something like this again,’” Smith said. “I said, ‘Well, I can’t promise the second part of that, but I can certainly attest to the first part.’ I’ve been following presidential elections since I was a small boy, and there’s never been anything like this.”

Here are some more of Smith’s views concerning a campaign season unlike any other.

CCC: In a nutshell, what has made this year’s election so strange?

TS: First of all, the Republican nominee is extremely far out of the mainstream compared to presidential nominees from either party for many, many years and does not feel obliged to follow the normal rules of campaign conduct. I would say, also, we are finally experiencing the maturity of social media in politics. The Twitter wars. From kind of the biggest picture context, I think that both political parties — but probably the Republicans more than the Democrats — are really reaping the whirlwind of big voting blocs have basically been ignored or marginalized. The bill is being paid this year.

CCC: How has social media changed the relationship between candidates and the electorate?

TS: It’s a two-way street. The voters know the candidates better, and the candidates know the voters better. Between that and just the 24/7 news cycle, a lot of that ends up getting played out in social media. Back in the day when there were three networks, no Facebook and no internet, the political elite was in a much better position to control everything. Fortunately for the country they, for the most part, did it in the public interest. For the good of the country, not for selfish gain. But it’s so decentralized now and fragmented.

CCC: How have students been reacting to the campaign’s twists and turns in class discussions?

TS: If I let it go, it would be very animated. But I make sure that it’s civil, respectful and that people can back up what they say. Emotions are still running high, but I’m really proud of the students because they’re just so curious about the why. Not just the what. One of the things we political scientists try to do is produce good citizens. That’s been a real positive outcome of this, is the students in these classes are just much more aware and better-informed citizens. That’s good for the republic.

CCC: How will we be talking about this election 20, 30 years from now?

TS: Whatever the result is, there are going to be millions of extremely disappointed, and possibly angry, voters. And possibly an anger with an intensity that we have not seen. So who is going to pay the price for that? I think a likely outcome is that both political parties are going to really have to take a close look at their relations with the electorate, understanding that business as usual is not going to be tolerated by a large chunk of the electorate. They’ll use the ballot box as their outlet. We might look back on 2016 as just being ‘Boy, that was a crazy year, but the country’s moved on.’ But, really, that’s in the hands of this generation of political leadership.

If you want to make your voice heard in the electoral process, be sure to go out and vote at your local polling place on Tuesday, November 8!