Where her heart is

Melinda Wrye-Washington hung one specific picture just to the right of the door leading into her office at the Southwell Complex, so that it’s directly in her eye line when she’s sitting at her desk. 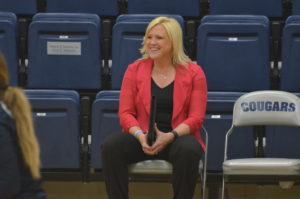 It’s the 1994 Columbia College women’s volleyball team posing with the banner from that year’s NAIA National Tournament, commemorating the first time in program history the Cougars made nationals. Wrye-Washington, then a senior transfer from the University of Missouri, led the team in kills, aces and digs, all marks that still rank in the top three of the program’s single-season records, and became the first Cougars player to earn first-team All-America honors.

“I look a little bit different there, but I still have it on the wall,” says Wrye-Washington, now in her 17th year coaching the Columbia College volleyball team. “It is my alma mater. It’s close to my heart. It reminds me that it’s where I came from. It’s not just a job to me. It’s much more than that.”

To supplement the picture, Wrye-Washington has plenty of other plaques and pictures on her office wall from her time as a player and coach. When you rack up a 628-98 record, advance to seven national championship matches and win two national titles, the accolades tend to accumulate.

She has so much on her wall that she almost didn’t have room for the latest addition, a framed tribute commemorating her inclusion on the Columbia College Athletics Wall of Honor, for which she was recognized before the Cougars’ home sweep of 11th-ranked MidAmerica Nazarene on Oct. 4.

Her former coaches at Columbia College, Wayne and Susan Kreklow, were on hand to help celebrate the occasion. They fit it into the schedule between straight-set wins by the team they coach now: the Missouri Tigers.

“They meant a lot to me as a student-athlete here at Columbia, to keep me on track to graduate and to really find a home,” Wrye-Washington said. “Then with my career, they mentored me as a coach and really helped me in all aspects of what I do.”

Wrye-Washington learned at a young age that you can’t do it all on your own. That’s actually how she got the nickname that’s stuck with her since her childhood in Barnett, Missouri: “Minnow.”

When she was around 3 or 4 years old, her grandfather, Truman Wrye, observed how stubborn Melinda could be. She didn’t want any help tying her shoes. No help combing her hair.

He told her she was “just a minnow in a big pond.” There’s no shame in letting others lend a hand.

“My grandmother was a teacher at Eldon Elementary and my mother was doing student-teaching there, and they started calling me that in the school, then my classmates,” Wrye-Washington says. “I think there’s kids at Eldon that, by the time we graduated, didn’t know my real name. I was never called ‘Melinda.’ Ever. Even at graduation.”

“Minnow” is how Wrye-Washington is referred to on the Wall of Honor, where her number 14 is one of only five displayed, along with men’s basketball players Marvin Malone and Thomas Roberts, volleyball player Amy Lodes and softball player Wendy Mertz.

Of course, most of her players call her “Coach.”

The Cougars, coming off their fourth national championship in program history, are 15-11 this season — including a 7-2 mark in American Midwest Conference play — with about a month to go until the national tournament. Wrye-Washington said this is the toughest schedule she’s ever put together for her team. She made sure to include ranked opponents in regular intervals throughout the slate so that, even if the Cougars dropped some matches, they’d use the quality competition to stay sharp and focused.

“I did not lay off of them one bit in scheduling,” Wrye-Washington said. “If we take losses, we take losses. But we will be prepared for the end.”

The strategy appears to be paying off. The Cougars are hitting their stride, winning seven of their past 10 matches and posting a string of five consecutive straight-set wins that spanned from the upset of MidAmerica Nazarene on Wrye-Washignton’s Wall of honor enshrinement night to a road win over William Woods on Oct. 12.

An experienced core of players such as seniors Sashiko Heredia and Eirini Chatziefstratiadou and junior Peiyi Liu, all veterans of last year’s title run, is helping lead the resurgence.

“We are getting where we need to be,” Wrye-Washignton says. “I think we’re going to be a contender late in the season. That’s where I want to be.”