Every day for two weeks, Tim Rich would walk nervously into Dr. Donald Ruthenberg’s office and check inside the Columbia College president’s rolltop desk to make sure it still contained two things. 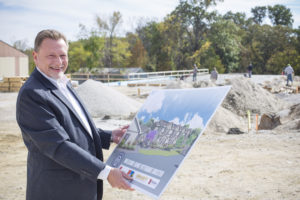 Tim Rich, a 1989 alumnus and executive director of Welcome Home, stands at the future site of the organization’s new shelter for homeless veterans.
(Photo by Kaci Smart)

One was an envelope with cash that Ruthenberg had saved from trading antique cars he had restored. The other was a journal notebook containing Ruthenberg’s will.

Rich was working through a bachelor’s degree at Columbia College while serving as Ruthenberg’s special projects coordinator. Ruthenberg had headed out on one of his regular trips to the Far East, Japan this time.

“A cleaning crew’s coming in every night. What if someone stumbles on it?” Rich remembered, with a laugh. “He placed his trust in me with something very tangible. That changed the way our relationship was. There’s something very powerful about knowing that someone trusts you with their memory and their money.

“It was still there when he came back, which he was pleased with.”

Rich, who graduated from Columbia College in 1989, has used Ruthenberg’s example to guide his own career in non-profit organizations all the way to his latest post as the executive director of the Welcome Home homeless veterans’ shelter, where he started in September.

Welcome Home is a Columbia, Missouri-based organization that can provide housing for up to 12 homeless veterans at a time as they work to get back on their feet and into a more permanent living situation. Rich made the move to Welcome Home after a short stint in the private sector that followed a six-year tenure as executive director of the Heart of Missouri United Way.

Rich said he’s excited for the challenge, especially with a significant expansion to Welcome Home’s service capabilities coming within the next year.

“In the last month or so, we’ve turned away 15 veterans that would have been eligible for our services, because we didn’t have enough bed space,” Rich says. “We’ve never been able to serve all the veterans that were here, and it’s heartbreaking when you have to turn somebody away knowing full well they qualify for everything and we could literally change their lives if we could get them in.”

Since its founding in 1992, Welcome Home has been a valuable tool for homeless veterans who are getting their lives back together. Rich says that the shelter can accommodate a veteran for up to six months through contracts with the Veterans Administration, but their average stay is only about 3 ½ months, after which 95 percent of their tenants are able to find permanent housing.

Richard Harding, a retired Air Force lieutenant general, vice president of the Welcome Home board of directors and Columbia College trustee, says homeless veterans living together can be an important bonding experience. Welcome Home is the only shelter in the state devoted solely to veterans.

“They support one another just like they did on the battlefield. The reason they fight as hard as they do in war is because of their buddies,” Harding says. “That translates extremely well in a homeless shelter. They’re there for each other. That kind of support is pretty important.”

The problem is Welcome Home can only serve a portion of the estimated 700 homeless veterans in the state. The organization broke ground in June on a new, $3.1 million, 32-bed facility by Patriot Place Apartments on Business Loop 70 as part of an $8.1 million Patriot Place project, and Rich expects it could be completed by next Memorial Day or July 4, at the latest.

It doesn’t fulfill the entire need, but it’s a start. The new facility will also be able to accommodate female veterans and families, something the current home cannot.

“Having the success rate we have, which means we can turn people through pretty quick and get them stabilized and back into housing, I think we’ve got a program in this new facility that we will be able to really take a chunk out of veteran homelessness in our area,” Rich said.

Rich wound up at Columbia College precisely because of his admiration for Ruthenberg. Rich became the Salvation Army officer in charge of Boone County operations in 1984 and met Ruthenberg’s wife, Dee, through her work on the Salvation Army board. Ruthenberg served as a keynote speaker at the Salvation Army’s annual meeting, and Rich came away so impressed that he wrote Ruthenberg asking for an opportunity to learn under him.

Ruthenberg created a position for Rich with one condition: He also had to go to night school and earn his degree.

When Rich graduated with his degree in individual studies with a business and marketing focus, he got to walk across the stage, look his boss straight in the eye and give him a big hug.

The contents of the rolltop desk remained safe and sound.

“He taught me some of what I have to do as a leader going forward. I have to teach and mentor my staff, then I have to entrust them with authority and responsibility to implement whatever it is we’re working on together,” Rich said. “I can’t withhold all of that authority and only put the responsibility on them. You have to have both of those. I looked up to him as a father figure in an awful lot of ways.”