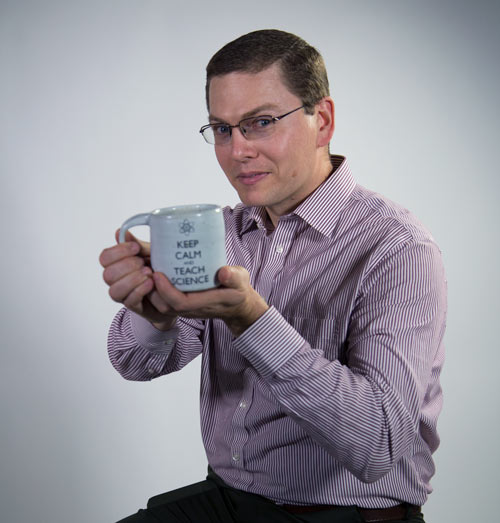 Dr. Kent Strodtman drinks a lot of coffee. Known for having an “uncommon amount of energy” for 8 a.m. lectures, he keeps a vast collection of mugs in his office and students know where to go when they need a coffee boost.

But when not upping his caffeine intake, Strodtman can be found in the Brouder Science Center labs where he teaches a wide variety of courses in biology and biochemistry. Though he works with freshman through seniors, his favorite course to teach is Biochemistry 101 where he sees students connect the dots in terms of what is actually going on inside their bodies at a fundamental level.

Whether he’s teaching students going into medical school or working with art majors fulfilling a general education requirement, Strodtman does it with humor and understanding.

For him, the professor-student interaction is all about “sharing knowledge.” In class, he likes to get students to think about big questions about research such as “Why is this significant? Why did they even come up with this? Who is this person and why should we care?”

It’s also a bonus when students adapt his way of thinking and analyzing situations. He relates this fact with a somewhat worrisome laugh, though he admits he’s already on his way to an army of miniatures with his four children at home.

One other thing that Strodtman has passed on to his kids? His love of the paleo diet.

All four kids eat paleo “much to my wife’s chagrin,” he said.

And much of the food comes from Strodtman himself, an avid hunter and gardener who prefers to know where his food is coming from and said “it just tastes better.”

Growing up in Salisbury, Missouri, Strodtman spent much of his time on the Missouri River and said “I find a lot of peace there.” In fact, he and his wife, also a Salisbury native and a graduate of CC, recently moved their brood back to their hometown after ten years in Columbia.

Reading about his birthplace and migration via the Missouri River is another pastime of Strodtman’s, who admits that he prefers nonfiction reading material when he has the time to catch up on his to-read list.

“A lot of what I’ve been reading lately has to do with health and food,” he said.

But in between classes you’re most likely to catch Strodtman sitting in on another professor’s lecture. Whether trying to understand something new or studying a different way of thinking, Strodtman said “There’s just so much more waiting to be learned.”