Burchard leaves a legacy as dean for Student Affairs

When you’ve worked at the same place for nearly three decades and built the sort of relationships that Faye Burchard has, past and present tend to collide in fascinating ways. 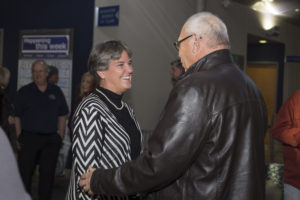 At a recent event, a student support assistant in the Online Student Services division at Columbia College named Gabrielle Gotangco made a special point to introduce herself to Burchard and tell her how much of an impact she made on her mother, Anna Gotangco Osborn ’91, when she was a Columbia College student.

Osborn is now a reading specialist at Jefferson Middle School, right across the street from campus, who was one of 11 Heinemann Fellows nationwide selected to receive funding for research projects that address challenges facing schools.

Shortly after meeting Gotangco, Burchard was going through her old papers and found a letter — complete with a picture — from Osborn celebrating Gotangco’s birth.

This is the sort of thing Burchard will miss the most when she leaves her post as dean for Student Affairs at the end of the year, a post she has held for all but one of her more than 28 years at Columbia College.

“I’m going to miss meeting new students,” Burchard says. “I tell our students every spring, ‘Please stay in touch. We want to know what you do when you leave Columbia College.’ And I love that. That’s the greatest, to get calls or notes, or read in the paper about somebody you knew as a student. That’s the best.”

Burchard and her husband, Bob, were a package deal when then-President Donald Ruthenberg brought them over from Missouri Western in 1988. Bob would be athletic director and head men’s basketball coach, and Faye could apply for vacancies as director of student activities or director of residential life.

She’d already gotten a dose of the latter, living with Bob in the Missouri Western dorms when he was responsible for residential life there. She wasn’t too keen on continuing that.

Faye had been director of intramural recreational sports at Missouri Western and felt those skills would translate to student activities.

She applied and interviewed, and Ruthenberg brought her aboard. After Burchard’s first year, Ruthenberg promoted her to dean for students. She thought they would surely be on the move again soon. Such is the life of a college basketball coach and his family.

Flash-forward nearly three decades, and Bob has won more than 700 games with the Cougars. Faye has impacted at least that many lives as dean for Student Affairs.

“She is respected by colleagues, beloved by students and alumni, and revered by her staff,” President Scott Dalrymple said. “Her impact here is significant and lasting. On a personal note, I feel privileged to have worked with her.”

Burchard says her time at Columbia College truly has been “a family affair.” She and Bob raised their children, Jennifer and Bret, in the community. Faye has seen the Columbia College campus change and grow, has seen generations of students walking through the halls.

The people haven’t changed. Nor has her care for the students. A couple of weeks ago, she happened upon one walking across campus, shivering against the cold.

I’m not your mother, she told her, but it’s freezing outside. You really should get a coat.

“I’ve always wanted to look after students like I’d hoped somebody was going to be looking after mine,” Burchard says.

Abbie O’Brien says Burchard has succeeded in that regard. O’Brien, a senior Biology major, is the president of Committee and Serving Together (CAST), a campus volunteer organization for which Burchard serves as an advisor.

Burchard has been involved with the organization since its inception, and O’Brien has been able to work closely with her as a CAST member and executive for the past four years. O’Brien says her favorite memories of Burchard come from their times serving together, whether at the Food Bank or hosting events at the Atkins-Holman Student Commons.

“I’ve literally seen her vacuum the second floor of the student commons after events. That’s one of the things I love, is she is there, present, not just like ‘you all do the actual work and I’ll just oversee.’” O’Brien said. “She gets in, gets her hands dirty and is right there with me and the other students.

“She’s just an amazing person, and so dedicated to Columbia College.”

To honor her commitment to the school, Columbia College leaders — along with alumni, friends and former students — created the Faye Burchard Student Leadership Award to recognize and honor students’ hard work and pay tribute to their service on campus and in the community.

Burchard is grateful for all the assistance from her Student Affairs staff over the years and proud of the ways in which the office has helped grow the number of student organizations on campus, expanded its services to benefit Adult Higher Education and online students and helped foster the growth of the Emerging Leaders Institute on campus.

She’s also quick to point out how uncomfortable she is with all the accolades being heaped upon her as retirement grows near.

“She doesn’t like when people stand there and talk about how wonderful she is,” O’Brien says.

Burchard would rather reflect on a career well-spent, how her office was able to make a difference at Columbia College and in the community at large thanks to the collaboration of thousands. She’s excited to get some more time to herself for projects around the house and visiting her grandchild in Florida, but it’s also bittersweet knowing the sort of work she’s leaving behind.

A framed picture hangs on the wall by her office door, a painting of a tree in the midst of fall, with some leaves on the branches and some on the ground. All the leaves are thumbprints: the ones on the tree from the children at Eugene Field Elementary School and the ones on the ground from the school’s faculty and staff.

It was presented to Burchard as a token of thanks a few years ago, when Columbia College’s 22-year partnership with the school — one that she headed — had run its course. At its height, she’d get 125 Columbia College students a week volunteering to walk down Rangeline Street and read to the students at Field.

She stayed long enough to see some of those elementary schoolers become Columbia College students.