Standing in Gov. Jay Nixon’s chambers at the state Capitol in Jefferson City on Nov. 28, 2016, Jason Jameson couldn’t help but feel a little out of place. 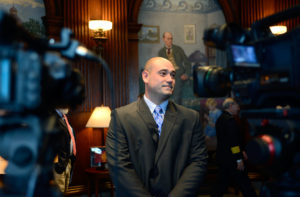 Jason Jameson ’08 was awarded the Missouri Medal of Valor at the Capitol on Nov. 28, 2016. Jameson is a former sergeant in the Boone County Sheriff’s Department who is now in the police academy in Arlington, Texas.
(Photo courtesy of Carsen Sikyta/Columbia Missourian)

Jameson, who earned his bachelor’s degree in Criminal Justice from Columbia College in 2008, was one of 10 public safety officers from around the state of Missouri at the Capitol that day, for a ceremony in which Nixon awarded each a Medal of Valor for actions undertaken in the line of duty in 2015.

For someone as humble and unassuming as Jameson, all that attention was appreciated, yet unusual.

“There were guys that literally ran into burning buildings with no protective gear on,” Jameson said. “To me, that’s a hero. What I did was just my job.”

Jameson, a former sergeant in the Boone County Sheriff’s Deputy, earned his medal for what he did on the night of Feb. 28, 2015, when he shot and killed a man who was on the run after being suspected of killing three people just outside of Columbia earlier that day.

“It’s one of those things where every cop, you plan for the worst and hope for the best,” Jameson says. “I spent 12 years of my life training for that exact scenario and hoping it never happened.”

Now, Jameson is in the middle of police academy training in Arlington, Texas, nearly two months away from completing the 32-week course and being able to join a new force.

While nothing can totally prepare someone for the unique challenges faced every day by police officers, Jameson says Columbia College helped him gain a solid grounding in law and allowed him to achieve a lifetime goal.

“I’m the first male in my family that’s ever gotten a degree,” Jameson says. “Columbia was very flexible. It took me forever to get my degree, because I’d work and save enough money and, once I got enough for a semester, I’d pay for it and do it a semester at a time.” 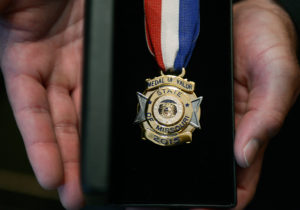 Jason Jameson holds his Missouri Medal of Valor, which is awarded to public safety officers who risked their lives to save and protect others.
(Photo courtesy of Carsen Sikyta/Columbia Missourian)

Learn more about Jameson in the latest CC Focus!

CCC: How did your family and friends react to your Medal of Valor?

JJ: My whole family is supportive of law enforcement. They understood the toll it took on me going through that. They were pretty thrilled that society recognized me having to go through that.

CCC: What’s it like being a new recruit again in Arlington?

JJ: It’s a very unique feeling. I’m just at such a different place in my life than most people who are going through the academy down here. All the kids I’m with, they either call me “Dad” or “Big Brother.” I’m playing the unofficial supportive role in it. Being a cop is being a cop, no matter whether you’re in Texas, New York or wherever. It’s the same thing, just the laws are a little bit different. It’s been fun.

CCC: What made you choose Columbia College?

JJ: My aunt (Jill Jameson ’70) went to Columbia College when it was still Christian College. I kind of knew about it because of that and thought it was cool. I just kind of fell in love with it. It was big enough to where it gave me a lot of stuff I could do, but it wasn’t too big to where I felt like I got lost.

CCC: Did you have a favorite teacher or class?

JJ: Keith Abernathy, because he had a story for everything. I would leave his class like, “This is going to be the best job in the world!” He was the one that got me really excited about it. Being a cop is so much interpersonal skills and communication. Scholastically, it prepared me for going to court. When case briefs come out, I have a good background to be able to read and understand them. (Constitutional Law) helped me the most because, when the Supreme Court comes out with something new, I can understand it where some other guys who have never done it before probably struggle with it a little more.