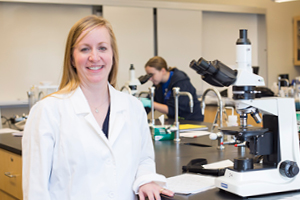 The life of a forensic scientist extends well beyond the laboratory. Dr. Melinda McPherson is well aware of this fact.

In a career that has spanned nearly two decades, the Columbia College assistant professor of Forensic Science has spent plenty of time in both the classroom and the field.

“Forensic science is very much an applied science. There is significant focus in areas such as chemistry and biology, but forensic science also has a major focus in the legal arena. The discipline bridges a gap between science and the law,” McPherson says. “Forensic scientists may encounter issues, circumstances or influences that pure biologists or chemists would not typically face.”

That’s why McPherson prizes hands on experience for her students at Columbia College, where she has been teaching for the past six years — two as an adjunct faculty member, four as an assistant professor.

It was a love of chemistry that first got her interested in forensic science. It was marveling at all the real-world applications science has to offer that kept her coming back.

“When I was growing up, there was a big push — and there still is now — for women to explore science and math, and I was drawn to that,” McPherson says. “I had a couple of influential teachers that encouraged my appreciation of science but I knew that I didn’t want to be a pure chemist or biologist. I was drawn to very practical applications of science, and forensic science really fit that calling. “I was drawn toward chemistry, to instrumental analysis and using sophisticated tools and techniques to analyze evidence.”

McPherson, a Coldwater, Michigan, native, earned both her bachelor’s and master’s degrees from Michigan

State in Chemistry, Forensic Science and Criminal Justice before receiving her doctorate in Analytical Chemistry from Virginia Tech.

Following summers of interning at the United States Bureau of Alcohol, Tobacco, Firearms and Explosives (ATF) during the last two years of her undergraduate degree, McPherson knew she was hooked and had found the career she was looking for. And while starting her teaching and research career at that point was appealing, she decided she wanted to practice her craft in the forensic laboratory.

She works to pass experiences from her professional pursuits on to her students.

“I want to give my students hands on opportunities that are very similar to what they will be doing one day in the field or forensic laboratory,” McPherson says. “I give students mock cases with evidentiary samples and allow them to apply what they’ve learned. It’s great working with our students. They are eager and inquisitive. It’s exciting for me to be a part of this learning process.”

She’s able to do that, in part, because of the facilities the Brouder Science Center has to offer, including the crime scene simulation laboratory, as well as chemistry and biology instrumentation. She also works closely with other faculty members from the scientific disciplines.

McPherson reminds her students that she and the other forensic science faculty members are valuable resources, because they all have extensive field experience. And it never hurts to pick the brain of alumni who happen to come walking back through the doors for a visit.

“Since the program began, it has gone through an evolution. We’re at a point now where we’ve worked very hard to align the curriculum and learning outcomes with the expectations and desires of the agencies that are hiring forensic scientists,” McPherson says. “We make sure our students are graduating with all of the science, math, forensic science and criminal justice classes that they need to get a job. That’s the end goal, to prepare our students for future employment in a forensic laboratory. The learning does not end when they leave us, but our goal is to provide a firm foundation for their continued growth and development as professionals in the field.”

It’s an evolution. Kind of like how McPherson’s interest in chemistry evolved into her life’s work.

“It’s exciting to watch the students build on an idea or concept,” she says. “I might see them as freshmen in a general chemistry class and then again in Introduction to Forensic Science. When I have upper level students in my Forensic Chemistry class, it’s really fun to see how they’ve progressed through their coursework. They’ve come full circle and are connecting ideas and solving problems. As a culmination, they are able to apply what they’ve learned over the years to mock cases and the analysis of evidence.”