Ralls flourishes across many media

To much of the internet, “shipping” does not mean what you think it means. It has nothing to do with sending a parcel. Nor does it involve anything nautical. 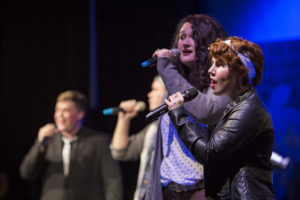 Senior creative writing student Anna Ralls keeps herself busy with campus activities, including as a member of the Jane Froman Singers.
(Photo by Kaci Smart)

It is the process fans of television shows, movies, and other forms of pop culture undertake when they see two characters in a medium they enjoy who are not involved romantically but really ought to be.

FBI agents Fox Mulder and Dana Scully from “The X-Files” are an early example. Fans would theorize about how the two would finally fall in love, write fan fiction about the couple and, basically, imagine how the universe would be if the show’s creators would just give them what they so desperately wanted.

They promoted a relationship between Mulder and Scully. They “shipped” them.

Thus was born a meme, or a bit of minutiae that spreads like wildfire, and spawns variation upon variation on the theme through internet message boards and forms of social media.

Confused? Curious? Then boy, does Columbia College senior creative writing student Anna Ralls have an essay for you.

“It’s super interesting to me the way we internet denizens say things and communicate in a way that is almost entirely foreign to the way people communicate in the non-digital world,” Ralls says.

Her essay, “WWW 243: Memes and Internet Fan Culture, Exam 3” — which takes the form of a quiz with answers filled in — concludes that the internet is many things but, above all else, “distracted.”

Ralls wrote the piece as an assignment for assistant professor of English Christina Ingoglia’s creative nonfiction writing class. On the first draft, Ingoglia informed Ralls that she had some tweaks to make, but that she needed to submit the essay for publication.

It found a home in the October edition of the Atticus Review, which in turn deemed it one of its best nonfiction pieces of the year and nominated it for inclusion in the prestigious Pushcart Prize anthology, a collection of poetry and prose that has been published annually since 1976.

Her piece will be up against hundreds of others to be a part of the Pushcart collection. It has already stood head and shoulders above an impressive field to get to this point.

“It’s something that I’d kind of had my eye on, but I didn’t ever anticipate that it would happen this soon,” Ralls says. “It’s something writers hope for and look forward to. I was hoping it would come several years down the road.”

It’s kind of in Ralls’ nature to be an overachiever. Her day planner — filled margin to margin with class times, appointments, tasks and other notes — can attest to that.

“Not only does (the Pushcart nomination) reflect well on the program we’ve got in place here, but also I think that she just richly deserves it,” Dr. Peter Monacell, chair of the Language and Communications Studies department, said. “She is an exquisite poet and has grown to really have a distinctive voice. But more than that, she’s very aesthetically confident.”

She is editor-in-chief of the Columbia College Literary Review and a tutor at the Seabrook Writing Center. She is a member of the Jane Froman Singers and the Elysium Players theater troupe. She studied abroad in England and served an internship on the editorial staff of the nationally renowned Missouri Review. She has had her work published in five different collections and won the Thelma Hall Prize in creative writing from Alpha Chi Honor Society this past summer. She is on track to graduate with a Bachelor of Arts in English this spring, is starting a distinction project with Monacell, and is in the early stages of applying to more than a dozen top-tier Master of Fine Arts programs.

“Frankly, sometimes I do wonder if she sleeps,” Ingoglia says.

Ralls’ myriad creative pursuits challenge her and serve as an outlet in times of struggle. Ralls said she was diagnosed with a panic disorder in 2014. Much of her work concerns the ways in which her mind works and how she copes.

Her Alpha Chi prize was for a presentation titled “A Kind of Confession: Poetry, Anxiety, and the Spoken Word.”

“That experience, when you’re sitting at the park with your boyfriend and, suddenly, you can’t control your breathing and he’s freaking out and you’re freaking out and that goes on for a weekend before you finally get to urgent care, that can’t not change you,” Ralls says. “Part of my panic attacks are hyperventilation, and I feel like I have an elephant on my chest and I can’t breathe. That literally takes my voice away. Writing these helped me express and process and gain some power back.”

Ralls, who is from Columbia, was homeschooled through high school and said she had all sorts of insecurities and anxieties when she first entered Columbia College. Through four years of interactions with classmates and close, personal attention to her craft from instructors such as Ingoglia, Monacell, Jane Froman Singers director Nollie Moore and voice coach Amy Johns, she has found her way.

She has found her voice.

“It’s been about conquering fear. I came here because I was too scared to move away from home,” Ralls says. “Almost as if to make up for that, I’ve been pushing myself to do more and more and more, and to realize I don’t have to be scared. I can do this.”