Building schools with yoga mats: the story of Ashley Celey-Butlin 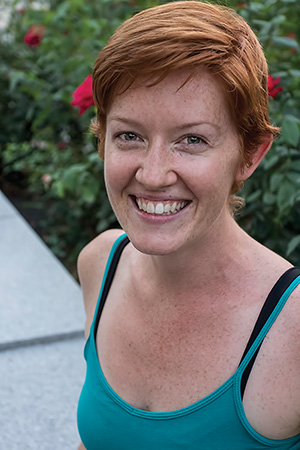 Last year, as Ashley Celey-Butlin ’13 prepared for a backpacking trip through Asia with her fiancé, she knew she’d experience a different culture and way of life.

She didn’t expect she’d use the trip to start up a yoga mat company to help build schools in India. Celey-Butlin had just quit her job in the real estate business and was contemplating her career goals. She thought the six-month backpacking trip would help her regroup. “I thought ‘getting away from it all’ might be rejuvenating,” she says. “It was an opportunity to unplug and figure out my next step.”

A couple of months before her trip, Celey-Butlin met with the founder of Change Heroes, an online fundraising platform. He inspired her to use her business knowledge for social entrepreneurship.

“I had been spending a lot of time at my yoga studio, nurturing my passion for yoga,” she says. “It was about two weeks before my backpacking trip when the idea for FlowMats hit me full force. Then everything just fell into place.”

As she and her fiancé embarked on their trip, Celey-Butlin began researching how to create the company. She decided to team up with the nonprofit organization Free the Children (now WE Charity) after researching different nonprofits. The group helps improve access to education by building schools in poverty-stricken areas of India.

“I think one of the most difficult things to determine is how to effectively solve global poverty,” she says. “I don’t have all the answers, but I believe education is one of the most important areas where we can invest.”

After an extensive online search, she found a manufacturer that could work with a small business and allow her to offer a reasonably priced product. After emailing back and forth with several manufacturers, she chose one based on their values and commitment to the environment and ethical labor practices.

Then she worked with the manufacturer on the mat’s design. In particular, she wanted it to include diagrams of yoga poses called sun salutations.

“I was working on establishing a home yoga practice for myself and thought it would be helpful to have the poses on my mat so that I wouldn’t need to look at a video or other diagram,” she says. “Having the poses embossed on the mats helps keep you focused on your practice, not distracted.”

The diagrams also show when to breathe in and out with each pose. The “empty” figures indicate exhales, and the filled-in poses are inhales.

“Learning when to inhale and when to exhale is the difference between a mindful practice and an unsafe or scattered practice,” she says. “Yoga is more about breath than movement.”

As she made her way through Southeast Asia and India, Celey-Butlin finalized her business plans. According to her company website, she received the first prototype while in Laos; the first payment was sent to the manufacturer from a “spotty Internet connection from a hostel rooftop in Cambodia.” She launched the website as she was completing yoga teacher training in India.

Today, the yoga mats have sold in more than 20 countries and are now sold on Amazon. Nearly 100 percent of the profits go directly to the nonprofit mission, she says, so to help recoup costs, the company also sells yoga bags.

“Once all the mats and bags are sold, we will have raised the necessary funds to start construction,” she says. “My goal is to gain momentum with the brand on Amazon and hopefully expand my mat offerings.”

Celey-Butlin says Columbia College played an integral role in giving her the self-confidence and skills needed to be an entrepreneur. “Completing my degree online in eight-week sessions with Columbia College showed me that given enough self-motivation and time management, I can really do anything,” she says.

If you would like to purchase a yoga mat or bag from FlowMats, visit Amazon.com. Use the code COLUMBIA, and you’ll get 10 percent off your entire order from FlowMats. The code is one per person and never expires.