The more Dr. Scott Dalrymple looked into Luella St. Clair Moss, the more he realized how formidable she was. 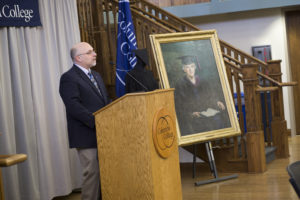 Dalrymple, the current Columbia College president, used this year’s Charter Day Celebration as an opportunity to brush up on Moss, who served three terms as the college’s president between 1893 and 1920, back when it was known as Christian College.

“The more I learned, I don’t think I would want to tussle with Luella St. Clair,” Dalrymple said during a speech in Dorsey Gym on Thursday, Jan. 19, to commemorate Columbia College earning its charter on Jan. 18, 1851.

When St. Clair took over after the death of her husband and presidential predecessor, Frank, she was only 28 years old. So not only was she one of the first female college presidents in the U.S., she was one of the youngest presidents regardless of gender.

By 1899, she had survived a bout of double pneumonia, and she and Emma Moore were owners and co-presidents of Christian College. When St. Clair wanted to leave to become president at her alma mater, Hamilton (Kentucky) College, in 1903, the board of trustees reacted unfavorably, hinting it may sue and halting production on what is now known as Launer Auditorium.

St. Clair calmly reminded them of a certain fact.

“She owned the college. I guess that would work, if you owned the place,” Dalrymple said. “There’s a quote from a (University of Missouri) person that called her, ‘a steam engine in petticoats.’ She had that gear. She was a smart lady and often got her way, because she was arguing from a standpoint of strength.”

Dalrymple served as the main speaker for this year’s Charter Day Celebration, educating the gathered crowd with a continuation of the talks he gave on the college’s early presidents from his first two annual Charter Day addresses. This one covered the years 1893-1920, when St. Clair — who added “Moss” to her last name upon her marriage to Dr. Woodson Moss in 1912 — and Moore helped guide Christian College through two bank panics, an outbreak of typhoid fever and the “Great Panty Raid of 1908.”

Through it all, the two served as strong female leaders for an institution founded upon the principle of providing a quality education for women, a fairly revolutionary idea in the mid-19th century.

Moss oversaw the construction of St. Clair Hall, named in honor of her husband and daughter Annilee, who died at age 11 in 1900, and the start of Launder Auditorium during her second stint as president. Over her final term, from 1909-1920, Dorsey and Missouri halls both went up, along with Rogers Gate.

Those five structures are still the “face of our campus,” in Dalrymple’s words.

“All I’ve got is the Quad, which just doesn’t compare,” Dalrymple said, with a laugh. “It’s really, really impressive. Not just her, but what she was able to work with so many people to make happen. It largely was her force of will that made those things happen.”

Dalrymple spoke at a lectern next to the portrait of Moss that hangs in St. Clair Hall. It was cleaned and restored for the ceremony, which ended with the Jane Froman Singers performing a tuneful rendition of the 1854 Stephen Collins Foster classic “Hard Times.”

“She accomplished all of those things in a country where women did not have the right to vote,” Dalrymple said. “To me, that takes the accomplishment of Luella St. Clair to the level of ‘legendary.’ She was an amazing figure, and we’re just lucky to have had her in our past.”