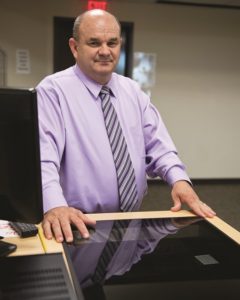 When Shawn Lueders ’93 feels like he’s struggling, he draws inspiration from the people around him.

That has helped motivate him through a higher education path that started with a Bachelor of Arts in Business Administration from Columbia College-Fort Leonard Wood in 1993 and has continued on through four master’s degrees and the Ph.D. in Project Management the 52-year-old Lueders is only a dissertation away from achieving.

It certainly helped push him throughout a 26-year career in the U.S. Army that included four years’ worth of deployments to Iraq and culminated in the rank of Chief Warrant Officer Four in the maintenance and logistics field.

“I always look around at people sitting next to me or behind me and I’ll think, ‘Heck, if they’re doing it, I know darn well I can do it,’” Lueders says. “It’s just like doing physical training in the Army. We’re out running and I’m just not feeling good and I just want to fall out of this run and start walking, but then I’ll look next to me and there’d be a 50-year-old sergeant major running next to me and I was like, ‘There’s no way I’m dropping out.’”

Lueders channels that passion into his role as an adjunct professor at Columbia College-Redstone Arsenal, where he has taught courses on information technology and business information systems for the past four years.

He moves seamlessly between the roles of student and teacher, beginning his time as an educator with a stint as an adjunct professor at Tarleton State University in Stephenville, Texas, from 2000-08 that started shortly after he received his Master of Science in Computer Information Systems from the school.

Lueders has also served as an adjunct faculty member, from 2009-11, at the University of Maryland-College Park — where he received a Master of Arts in Business Administration — and Embry-Riddle Aeronautical University in Daytona Beach, Florida, where he earned master’s degrees in Systems Engineering and Project Management.

Even though he’s the educator, he never stops looking for ways to be educated.

“I honestly learn more as a teacher than I did as a student,” Lueders said.

Columbia College helped put him on track to becoming both.

Lueders says he was not a great student in high school but, once he started taking classes at Fort Leonard Wood, he didn’t give himself any other choice but to buckle down.

“The importance of maintaining a good GPA and also being in the military and using tuition assistance, if I failed, I had to pay (the military) back for the class and definitely didn’t want to do that,” Lueders says. “The main thing is that it helped me realize the amount of effort was not that much different to change a ‘C’ to a ‘B’ and a ‘B’ to an ‘A.’”

Lueders used that competitive drive to maintain high grades in school while he earned consistent promotions in the Army.

His time in the armed forces also allowed him to see the world, traveling to locales such as Germany, Korea and Thailand — home to his favorite type of cuisine — as well as living in Afghanistan and Kuwait as a civilian.

He uses himself as an example to help push his students to greater heights.

“The most inspiring thing for me as a teacher is to see how some of these students evolve and develop,” Lueders says.

Even if he doesn’t exactly conform to the profile of a typical academic. He’s a classic rock fan
who saw Rush live in concert in Germany in 1989. He restores vintage cars as a hobby and has been driving a 1970 Camaro since he salvaged it 24 years ago.

“I do all my own work on my cars, changing oil, alternators, batteries, brakes, whatever it takes,” Lueders says. “A lot of people are surprised. I don’t know why, because that’s what I did in the military.”

So if you’re a Redstone Arsenal student who happens to spy an oil-covered man tinkering with a classic car on the base, make sure and be civil to him. He may very well be your Management 393 professor next session.

“They see someone who is finishing a doctorate crawling underneath a car changing out CV joints,” Lueders says. “It’s just something I enjoy.”