On March 20, students in Tonia Compton’s Women’s History class will get the chance to share some one-on-one time with a woman who’s in the process of making some history of her own. 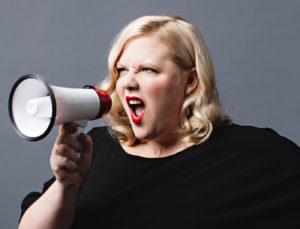 Lindy West, the New York Times best-selling author and women’s rights and body image activist, will serve as the main event for Columbia College’s Women’s History Month programming this year, a monthlong celebration that culminates in a talk by West at 7 p.m. on March 20 in Bixby Lecture Hall.

Earlier that day, West will be a special guest in Compton’s class.

“To give them the opportunity to be exposed to a national speaker of that caliber is such an incredible opportunity,” said Compton, an associate professor of History at Columbia College. “That’s the sort of opportunity very few people get, to be able to interact with her and have a chance to talk with her. When we do Women’s History Month, the Schiffman Lecture and other events like that, we’re really proud to be able to bring in these national speakers and give our students these opportunities.”

This year, the Women’s History Month theme at Columbia College is “Building Women’s Futures: Women and Work in the 21st Century.” That conforms nicely to the theme set forth by the National Women’s History Project: “Honoring Trailblazing Women in Labor and Business.”

Compton says that is a happy accident. The college’s planning committee came up with this year’s theme before the national organization announced the nationwide one.

“The workplace now is not so clearly defined,” Compton said. “There used to be a clear set of women’s work that women did outside the home. We’ve worked really hard at eradicating those stereotypes, but they’re still with us.

“(The national theme) just kind of reinforced that there is a national conversation happening about this issue: women in the workplace, what that means and the various issues tied to that.”

West has written and spoken extensively on the subject of subverting gender norms in her work as a columnist for The Guardian newspaper, a contributor on the radio show This American Life and in her best-selling 2016 memoir Shrill: Notes from a Loud Woman. In December, the entertainment publication Variety reported that actress Elizabeth Banks’ production company has optioned the rights to Shrill for a half-hour show.

West will be available to sign copies of Shrill for students, faculty, staff and members of the Columbia community in attendance at a reception after her talk in Bixby on March 20.

“She’s being incredibly generous with her time. It demonstrates how important women’s issues are to her,” Compton said. “Shrill is just such a phenomenal book. To get a chance to hear more about that from her and ask her more questions about that, especially in light of the current political climate, I think that’ll be really interesting, to see her take on how we’ve seen a rise in women’s activism and where that’s going.”

Columbia College’s Women’s History Month events start off with a brown bag lunch discussion of gender, vocation and occupation at 11:15 a.m. on March 2 in the Lee Room of Dulany Hall. A screening of the film North Country — starring Charlize Theron and depicting the first successful major sexual harassment case in the United States — will follow at 6 p.m. on March 9 in the Lee Room.

A “Meet Your Future” panel will take place from 3-5 p.m. on March 15 in Dorsey Gym, in which community members who work in non-traditional professions for their gender will lead a discussion of work and gender stereotypes. The panel will include: former Boone County Southern District Commissioner Karen Miller; Columbia Police Department Deputy Chief Jill Schlude; Sarah Kovaleski, director of engineering design at Ameren Missouri; Columbia College alum Anne Churchill, owner and event and wedding planner at AnnaBelle Events and owner of Jubilee Planning Studio; and others.

“We always want our students to come out of these experiences thinking about how this impacts their life. Whether that’s the decision to pursue something they wanted to, or for a girl to say, ‘You know? You’re right. I can be a’ fill in the blank,” Compton says. “Maybe they already made that decision and need to hear from somebody else that, yeah, it’s OK for women to do that kind of work, or it’s OK for men to do that kind of work. Society doesn’t have to tell you that that’s not normal for a boy or a girl. Just to see that and get that reinforcement, or to be inspired to try something new or different that they maybe didn’t think was possible.”