Melinda Wrye-Washington didn’t really have an answer to the question. 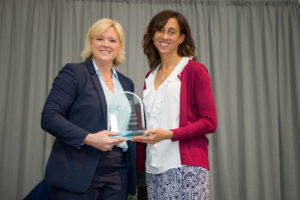 Wrye-Washington, Columbia College’s volleyball coach, was on the stage at Southwell Complex after winning the Decade of Excellence award at the 20th annual Women’s Intersport Network for Columbia awards luncheon on Tuesday, Feb. 7.

Radio host David Lile from KFRU-AM, tasked with interviewing each of the day’s award winners, asked Wrye-Washington what she would have been doing for the past 10 years, had she not been piloting the Cougars to a 358-66 record, 10 straight NAIA National Tournament appearances, four trips to the Final Four and the 2015 national championship.

“I don’t know. This is my home,” said Wrye-Washington, a 1995 Columbia College graduate. “The gym is my home.”

That home, where the volleyball program’s four national championship banners hang, hosted more than 400 guests for this year’s WIN luncheon. Wrye-Washington has compiled a 643-99 record and two of those national titles over her 17 years coaching the Cougars, a span of time in which the team has never failed to win 30 or more matches in a season.

She is also a four-time WIN Female Coach of the Year honoree and, as Cougars athletic director Bob Burchard mentioned in the luncheon’s opening remarks, presides over the winningest volleyball program in NAIA history.

Wrye-Washington wasn’t the only Columbia College representative recognized at the WIN luncheon.

Senior softball pitcher Paxton Welch took home the Mentor of the Year award for her work coaching the 12-and-under Rockers competitive softball team in Columbia. The Jefferson City, Missouri, native is a first-team all-conference ace for the Cougars who also just so happens to also serve as a strong role model for the Rockers players who want to follow in her footsteps.

“She spends a lot of time with her young girls,” said Columbia College assistant softball coach Debbie Jameson, who accepted the award on Welch’s behalf. “She’s just a real inspiration, provides a lot of guidance and puts a lot of time in. She’s really good at it.”

Natasha Brown, associate head coach for the Missouri track and field team and this year’s keynote speaker, stressed how important such efforts are.

“I honestly wish, when I was growing up, I had an event like this,” Brown said. “This is amazing. This is really beautiful.”

Brown described how she used a mixture of a strong supporting cast and her own perseverance throughout her life to mold herself into a world-class runner. Brown was a member of the silver medalist 4×400-meter US national relay team at the 1992 Barcelona Summer Olympics, and she won the 1989 indoor national title in the 400 meters while running collegiately at Missouri.

“If there’s that thing you’re putting off, that you don’t want to do, don’t want to try it, I just want to say: maybe think about trying it. You don’t know where it’s going to lead,” Brown said. “For everybody in this room, you’re all so important to the athletes that you touch. You never know what your words are going to mean to somebody who’s listening to them.”

Keller, who led the Cougars to a 27-6 record last season, was a finalist for the Female Coach of the Year award won by Missouri women’s basketball coach Robin Pingeton.

Carter hit .472 as a freshman to earn honorable mention All-America honors and a nomination for Collegiate Sportswoman of the Year, which went to Missouri cross country individual national champion Karissa Schweizer.

Klein was a finalist for the Inspiration Award, after battling through a stress fracture to score 10 goals and log eight assists for the 19-2-3 Cougars this past season. Missouri cross country runner Jamie Kempfer won the award.