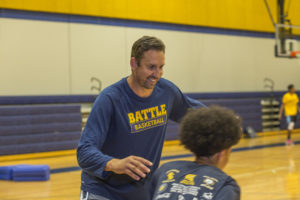 Burchard, the Hall of Fame Columbia College men’s basketball coach, wanted Meny to come play for him at Missouri Western in St. Joseph, Missouri, where Burchard was an assistant coach in the mid-1980s. The freshman opted instead for Benedictine College in nearby Atchison, Kansas.

Before the 1988-89 season, Meny transferred to Columbia College to be closer to his hometown of Paris, so his parents could watch him play. The Cougars were going through a coaching change at that time, and Meny didn’t know who his new coach would be. Who do you think showed up on the first day of practice?

Meny did. The forward set a program record of 314 rebounds in the 1989-90 season that still stands, and he ranks ninth on the Cougars’ career rebounding list with 561. After graduating with a bachelor’s degree in Education, Meny embarked on a coaching career that led him to Van-Far High School in Vandalia, Missouri — where he won a state title in 2004 — and Palmyra (Missouri) High School.

Now he’s back in Columbia, taking the reins of the Battle High School boys basketball program for the 2016-17 season. He plans on seeing his old coach quite often.

“(Burchard) has taught me a lot,” Meny says. “You can look at the x’s and o’s, but knowing how to treat kids off the court and those kinds of things is valuable in today’s times. Who better than a Hall of Fame coach to learn from?”

Meny says his interest in coaching grew organically after his playing career ended. He started as an assistant coach at Madison High School, about 40 miles north of Columbia, before getting his master’s degree and taking over the programs at Van-Far and Palmyra.

He helped build all three programs into district champions and compiled a 431-280 record as a head coach over 22 seasons.

“You get around the kids, I’ve gotten a lot better over time,” Meny says. “I’d like to take some of those teams I had early, knowing what I know now. Things change a lot.”

The move back to Columbia was a long time coming. In the past, Meny would come back to campus a time or two a year to take in a game, hang out with former teammates and give Burchard a hard time.

Now, he’s looking forward to his family — his wife, Sheila, his sons, Trae (a junior at Battle), Tristan (an eighth-grader) and Trevor (a redshirt freshman on the Quincy University basketball team) — getting a chance to thrive in the community.

“I told my wife we probably should’ve tried to get to Columbia a long time ago,” Meny says. “We felt like Columbia was a good spot for us.”

Meny has his work cut out for him in turning around the Battle program.

The Spartans won only 16 games in their first three seasons of existence, but Meny is enthusiastic about the commitment he’s seen from his players, starting with offseason conditioning. He says 58 students showed up for an informational meeting at the start of the school year.

“The number one thing we talked about was changing the culture,” Meny says. “It’s tough. Everybody wants to play at Kentucky and Duke. But do you really want to go somewhere and help build a program and say, ‘I was part of that at the beginning?’ ”

The rebuilding process is off to a good start. Battle is 7-12 on the year after starting the season 1-6. The Spartans recently went on their first three-game winning streak in program history.

If Meny ever needs any pointers, Burchard’s right across town.