Columbia College students who are eager to make a difference in the world but struggling with how to start can look to this year’s Schiffman Ethics in Society Lecture speaker for guidance. 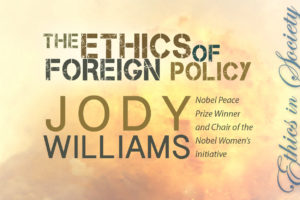 Jody Williams shared the 1997 Nobel Peace Prize with an organization she helped found — the International Campaign to Ban Landmines (ICBL) — after the ICBL helped join 122 nations together to sign a treaty banning the use, production, sale and stockpiling of anti-personnel mines.

She served as the founding coordinator and campaign ambassador for the ICBL, as well as its chief strategist and spokesperson, as the initiative grew to include more than 1,300 non-governmental organizations in more than 85 countries.

Williams followed her passions from her hometown of Putney, Vermont — population: less than 3,000 — to the Nobel Prize. She was only the third American woman and 10th woman of any nationality to receive the Nobel Peace Prize.

“People say, ‘Well, what can I do?’ She’s an example of a small-town, Vermont girl who went out and did something,” said Dr. Anthony Alioto, Columbia College professor of History and the Schiffman Chair in Ethics, Religious Studies & Philosophy. “It takes a lot of persistence. You have to put up with a lot of stuff. But the goal is peace. How we live with each other is one of the great ethical questions of all societies.”

Williams’ talk, “The Ethics of Foreign Policy,” takes place at 7:30 p.m. on Wednesday, March 8, in Columbia College’s Launer Auditorium. She is the 15th speaker since the college’s Althea W. and John A. Schiffman Ethics in Society Lecture Series started in 2003.

Paired with the annual Schiffman Lecture in Religious Studies in the fall, the Ethics in Society lecture strives to engage students, faculty and the Columbia community in discussions about ethical issues surrounding contemporary events.

“(Williams) is an outspoken peace activist,” Alioto said. “She believes that working for peace — because there are so many forces arrayed against a person like this — requires a lot of dogged persistence. And not for the faint of heart.

“Landmines: once the war is over, everybody goes home. Who cares about the landmines? The problem is landmines don’t know the war is over. So they keep giving, you might say. A lot of that is the destruction of civilians, children especially. It’s disastrous. It brings a lot of suffering.”

Williams made the effort to ban landmines, along with raising awareness of the devastation caused by them, into her life’s work. She has spoken on the issue at such international bodies as the United Nations, the European Parliament and the Organization of African Unity. She has written on the topic for journals produced by the U.N. and the International Committee of the Red Cross, among other publications, co-authored a study detailing the socio-economic consequences of landmine contamination and is the author of two books — Banning Landmines: Disarmament, Citizen Diplomacy, and Human Security and her memoir, My Name is Jody Williams: A Vermont Girl’s Winding Path to the Nobel Peace Prize.

She started her career as a humanitarian working in Central America. This is where she first cultivated an interest in the fight against landmines, as part of her duties involved providing artificial limbs to children who had lost arms and legs to landmines in El Salvador in the 1980s.

Williams and the ICBL put talk into action.

“It’s not just complaining, it’s actually going out and doing something,” Alioto said. “You could barely get 122 nations to agree on food. (The treaty) is a real accomplishment.”

You can support programs such as the Schiffman Lecture series by making a gift to the Columbia College Fund at choosecc.org.