The Columbia Business Times cover featuring Columbia College President Scott Dalrymple in the Game Hut — the home of the school’s new eSports team — won “Best Cover of 2016” in a poll of the magazine’s readers. 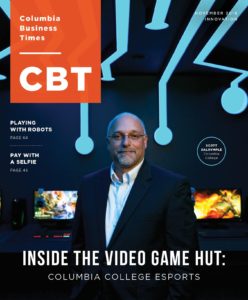 The cover of the November issue of the Columbia Business Times.

The November issue of the Columbia Business Times followed an “Innovation” theme and featured an in-depth story on the Columbia College eSports program, complete with action shots of the players in the Game Hut. Dalrymple graced the cover, flanked by computer monitors and the distinctive ceiling lighting panels that give the Game Hut its character.

Readers could vote for the “Best Cover of 2016” among all 12 of the Columbia Business Times covers from the past year. The poll began Dec. 15, 2016, and ended Jan. 31, with the magazine announcing the winner via Twitter on Feb. 2.

There is already a considerable amount of buzz surrounding the team at Columbia College, which became the fifth school in the country to offer scholarships for eSports.

The Cougars advanced to the next round of the uLOL (University League of Legends) Campus Series Tournament with a 5-0 record and will compete for a $15,000 prize at the 2017 Wichita (Kansas) eSports Convention starting Feb. 3.

Columbia College is also welcoming in some of the top eSports teams in the nation for the inaugural Midwest Campus Clash and Gaming Expo in the Southwell Complex on April 8.