If you attended this year’s Missouri Collegiate DECA State Career Development Conference, there’s a good chance you walked out with the Kanye West song “Power” stuck in your head. 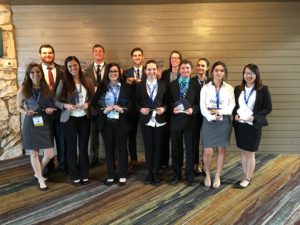 Columbia College’s Collegiate DECA chapter took home 14 trophies at the state competition and advanced all 12 of its competitors to nationals.
(Photo submitted by Mercedes Nute)

Each school that competed at the DECA business student organization’s conference at Lake Ozark’s Lodge of Four Seasons on Feb. 23 and 24 could choose its own walk-up music for when someone from its chapter came up to the stage to receive an first-place award.

Columbia College’s chapter chose “Power.” So the song played over and over — and over — again.

“When any of us would get announced, the other people (in our chapter) were standing up and cheering,” said Mercedes Nute, a senior accounting and finance major and president of CC Collegiate DECA. “Never have we been that loud of a presence in the room. It was just nice to see your whole school back there.”

Columbia College took home 14 of the 60 total trophies presented at the state conference and qualified all 12 of its competitors for the International Career Development Conference (ICDC), which takes place in Anaheim, California from April 19-22.

While Columbia College’s contingent was smaller than some of the other chapters, as Nute put it, “You can’t beat 100 percent” qualifying for Anaheim.

“We were really able to bond together, that we all won. We never had that experience before,” said Richardson, a senior finance and management major who is CC Collegiate DECA’s state representative. “Going home, nobody was sad. Our entire bus was happy.”

The competition in each category involved a mixture of testing and role play, in which the competitors were presented with a real-world problem and tasked with coming up with a solution that would appease their judges, themselves industry professionals.

In Anaheim, the competition gets tougher, the lights get brighter and the crowds get bigger. And the opportunities for learning and career advancement abound.

“What’s a vacation for us is going to seminars and stuff. That’s not always for everyone,” Richardson said. “We’re just all nerds and really like that stuff. So, for us, it’s the equivalent of going to Maui.”

Nute, Richardson and Frappier, a senior marketing major who is the chapter’s vice president, form the core of the CC Collegiate DECA executive team, along with Myles, the secretary, and Saburi, the treasurer. All of them followed different paths to DECA.

Richardson joined in high school after being assigned a Marketing class and finding he had a knack for it. Nute signed up at Hey Day her freshman year to get a college resume builder, then fell in love with it. Frappier joined after taking Marketing classes at Columbia’s Hickman High School, like Richardson.

His childhood dream was to own a Dairy Queen.

“I said, ‘If I’m going to be owning a Dairy Queen, I’m going to need to know marketing,’” Frappier said. “I took that class and my teacher, Pete Eichholz, was just so passionate about marketing. That led me to DECA, because he was an advisor.”

All of them feel as if the learning and networking opportunities afforded by their involvement with CC Collegiate DECA will position them well for getting jobs after graduation. They also feel that you can only get as much out of DECA as you put in.

Chapter advisor and instructor of business administration Ken Akers says that isn’t a problem for these three.

“These are just really, really special people. These are young professionals. They are so dedicated to the college,” Akers said. “They have just been remarkable to work with. This is truly a student group. I’m just along for the ride.”

Frappier said he and the other executives could tell there was something special about this year’s group because all the chapter members were eager to learn and get involved from the very earliest meetings in the school year.

That led to them running the table at states. And sending a few people home humming Kanye West.

“We’ve got a group of winners,” Richardson said. “Nobody went down there just expecting ‘I’ll do my best, but whatever.’ Everyone wanted to win.”