Oscar Rivera thought he was in town for a soccer tryout.

The high school senior and his sister, Jennifer Rivera Bell, made the 12-hour drive from Opelousas, Louisiana, to the Columbia College campus because the Cougars’ soccer coaches had informed Rivera that they needed one more in-person look at him before determining whether he had a spot on the team.

Except that’s not really why Rivera was on campus. Columbia College had called him back because he was one of the recipients of this year’s batch of Presidential Scholarships, which cover full tuition for four years at Columbia College.

Out of the nearly 70 hopefuls who applied through interviews and essays on Scholarship Day, he was one of the 10 that won the oversized check for $87,744 and the surprise unveiling ceremony that goes along with it.

When Rivera walked into Southwell Gym on Feb. 24, heard admissions counselor Brianna Hickman’s voice echoing over a bullhorn and saw Scooter the Cougar among a throng of well-wishers, he knew what was up.

Even if he couldn’t quite believe it in the moment.

“I had no idea,” Rivera said, beaming. “I can’t even talk straight right now. To be honest, I really didn’t think I was going to get the scholarship. I heard what other people had with GPAs and ACTs, so I knew it was tough competition. The scholarship really hits me that I really get to go to college. And it’s going to be a big next step for my life.”

Rivera had been combing all the Missouri news he could find online to see how many students had already received Presidential Scholarships. He knew from his research that the final 2016 presentation happened March 5 but, as February wore on, he was starting to lose hope. 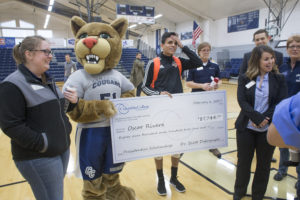 Oscar Rivera receives his full-tuition Presidential Scholarship award check at Southwell Gym on Feb. 24. He was one of Columbia College’s 10 winners this year.
(Photo by Kaci Smart)

He checked his sister’s email inbox for the rejection letter. She already knew the good news. She just couldn’t tell him.

“I felt bad the entire time. These past couple days have been really, really rough,” Bell said. “He’s been having super hard tests at school. I just wanted to relieve him of that. But I held it in. I held it in.”

Widhalm’s parents, Darrell and Monica, didn’t have much trouble keeping the secret from their daughter until the day of the presentation, Feb. 14.

Monica had asked Logan to dress up that day, so she could get her picture taken at the career center at Columbia’s Rock Bridge High School. Darrell, who works out of a home office, tried to wait out his daughter’s departure for school but eventually crossed paths with her. She asked him why he was wearing dress clothes. He said he had a meeting to attend.

When the parents met at Rock Bridge before the presentation, they chose the parking lot in which they assumed Logan would not park. They saw her car pull in minutes after they met up.

“Monica and I had to get down behind cars in the parking lot as she walked in from her spot,” Darrell said. “I don’t think she saw us, but I was afraid we’d get arrested for crouching behind cars as she went by. Yeah, today was a little challenge.”

Still, Logan didn’t have an inkling until the Columbia College entourage — Scooter in tow — barged into her AP Environmental Science class and broadcasted her accomplishment in front of family, friends and classmates. Fittingly, environmental science is what Logan wants to study in college.

Monica says her daughter isn’t one to seek the spotlight. So it was nice seeing one fall on her for a day.

“Logan has two amazing older sisters, so you’re always kind of in that shadow of all the great things they’ve done,” Monica said. “We all adore her, and it’s been really fun to watch her blossom as her own person. It’s very satisfying to see it all come to fruition.”

He didn’t get the sense that any of this year’s recipients knew what was coming, which just made the payoff that much sweeter.

“These students work so hard and, oftentimes, get very little recognition for the work,” Barringer said. “To be able to give a full-tuition scholarship and also be able to do it in the way we do is something they’re going to remember for the rest of their lives. Several of our students this year have said that this is the best thing that’s ever happened to them. To be able to be part of that is definitely the highlight of my year.”

She’d seen plenty of campuses during college visits with her older sisters. The one that she chose, chose her right back.