For a moment, as Ethan Howser rounded the bases at Atkins Field on March 3, he thought he might be dreaming. 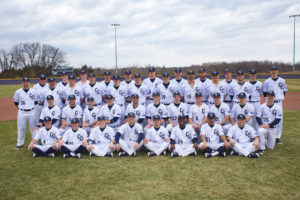 The Columbia College baseball team on its home turf at Atkins Field.
(Photo by Kaci Smart)

Howser, a sophomore center fielder from Waynesville, Missouri, was the leadoff hitter for the Columbia Cougars baseball team in its first home game in 35 years, the first batter to head to the plate before a home crowd after the program had been dormant since 1982.

And he socked the first pitch he saw from Williams Baptist starter Ryan Andrews over the fence in left field for a home run.

“It was kind of like a movie, you know?” Cougars coach Darren Munns said. “You couldn’t write a better story.”

Howser’s shot set the tone for a successful homecoming for Columbia College, as it blasted Williams Baptist, 16-5, in seven innings. Cougars hitters pounded out 16 hits and scored 12 runs over the fourth and fifth innings in support of starting pitcher Zach Maskill, who gave up two runs on four hits and struck out five over five innings of work.

Leftfielder Tanner Allen ended the day in style, diving to snag a sinking line drive for the final out.

“We were pumped all season just for this day,” Howser said. “We came out and killed it, in my opinion. It was a good day.”

Columbia College has had a lot of good days during its first season back in action. The Cougars are 11-2 in American Midwest Conference play and sit at 21-9 overall.

That’s despite the fact that their roster includes only 10 juniors and seniors to go along with 24 freshmen.

“We have a lot of great upperclassmen that are leaders and really kind of show us the ropes on how their programs have been before,” said freshman second baseman Ward Mershon. “Our coaches kind of set the example on what to expect from us here at Columbia College. I think we just kind of all come together and play the game.”

The Cougars are scoring 8.2 runs a game offensively and have three starters hitting better than .400 on the season. First baseman Andrew Warner, a junior transfer from Longview Community College in Missouri, is hitting .459 with eight home runs and 39 RBI. Maskill, a senior from Kansas City, is 3-3 with a 2.35 ERA on the mound, and junior Jeremy Rettig is 6-1 with a 3.46 ERA. On March 17, junior pitcher Cody Ebert threw a no-hitter against Morthland College, only the second no-hitter in Cougars baseball history and the first since 1977.

Maskill came to Columbia after the program at his former school, Lincoln University in Jefferson City, folded.

“It’s honestly the nicest thing I’ve ever been offered in my entire life,” Maskill said. “I’m 100-percent blessed and thankful. So I’m going to try to make the most of it.”

A spirited crowd of Columbia College faithful showed up on a cold, blustery afternoon to cheer on Maskill and his teammates in the March 3 home opener.

Columbia College President Scott Dalrymple threw out one of four ceremonial first pitches, along with Jim Sublett, who played baseball for the Cougars in the late 1970s, trustee George Hulett — who played baseball at Missouri and in the minor leagues — and Columbia Public Schools Athletic Director Bruce Whitesides.

All the fans received a commemorative baseball emblazoned with the interlocking “CC” athletics logo and “2017 Columbia College Home Opener.”

The team on the field was able to feed off the energy coming from the stands. Even if it took players an inning or two to shake off some jitters.

“There was some nervous energy, for sure. A lot of adrenaline, but definitely ready to play,” Munns said. “We’ve been chomping at the bit to play at home for a long time now. We finally got to play at home, and guys were excited. I’m glad we came through.”

Munns said the excitement from alumni who played for the Cougars during the program’s first stint — some of whom he knows personally from his time living in the community — has been palpable.

He saw a number of them in attendance at the home opener and hopes to see even more at the alumni reunion April 29, a day on which the Cougars host conference foe Freed-Hardeman.

“We’re definitely going to get them involved as we move forward,” Munns said. “We want to play well, play the right way and make those guys proud of Columbia College baseball.”