As someone who’s going through the adoption process herself, Columbia College-St. Louis location director Erika Thomas has a soft spot for children who are in the foster care and adoption system. 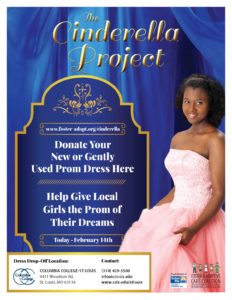 As she talked to her staff about the location’s upcoming involvement with the Cinderella Project — an event held by the Foster & Adoptive Care Coalition of St. Louis — she realized she wasn’t alone.

“It kind of pulled on everybody’s heartstrings a little bit,” Thomas said. “I found out that a few of my staff were actually adopted, went through foster care. Or their mom was adopted. It just seemed like everybody had some kind of connection.”

Over a five-week period that ended February 14, Columbia College-St. Louis collected 77 prom dresses for the Cinderella Project, which provides new or slightly used dresses to high-school aged girls in the St. Louis area who can’t afford a formal gown.

Thomas said she first became involved with the group three or four years ago while working at the Art Institute of St. Louis. When she was named director at Columbia College-St. Louis last year, she already knew it was a great way for the location to get involved in the community.

“I really felt how things like this can change a young lady’s life. A lot of times, they just need a positive, somebody who takes the time to mold and care for them,” Thomas said. “There’s nothing like a school being associated with something in the community. We care about the people in the community, and this is what we do.”

After Columbia College-St. Louis and the other 20 donation locations around the area collected their dresses, they brought them all to the Refresh resale boutique store in Brentwood for a “Say Yes to the Prom Dress” event March 4.

Thomas and other Columbia College-St. Louis staffers volunteered their time as personal shoppers for the girls who came in looking for dresses, taking them around the store and helping them pick out the perfect look.

She said it’s important for the staff and students at Columbia College-St. Louis, which has a strong human services program, to see the sort of people their work can benefit, as well as letting college prospects in the community know about the academic programs the location has to offer.

“It’s that word of mouth. Most of the time what we hear from students is they find out about Columbia College from somebody they knew,” Thomas said. “It’s because somebody they knew at church, across the street, a best friend, whatever the case may be. We’re coming from a good, healthy place. We want to make sure they don’t feel like we’ve just cut them loose and sent them off into the woods. Just letting them know they still have support as they age out of the foster care system.”

And it’s not stopping with the Cinderella Project. Thomas said the location is already in the process of creating a partnership with the Fathers’ Support Center of St. Louis, which helps people become responsible parents, and wants to branch out into other community endeavors.

“I believe it brought us closer together and gave us something else to shoot for,” Thomas said. “It makes an impression on the students, because the students see that we care about the community, and we’re not just trying to sell you education.”