Before Lindy West’s readers knew what she looked like, the negative comments her work received centered on the impersonal: the content of her pieces for the Seattle weekly publication The Stranger, her ideas, her style of writing. 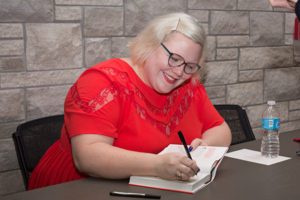 Author and activist Lindy West signs copies of her book after her Women’s History Month lecture at Columbia College.
(Photo by Kaci Smart)

She remembers the first personal one, the first one that referenced her appearance. It hit the internet on June 9, 2009, at 11:54 p.m. They haven’t stopped for the past eight years.

“While the tenor of my commenters was often snide and disdainful, they stuck to hating the message, not the messenger,” West told a room of around 100 attendees in Columbia College’s Bixby Lecture Hall on March 20. “Those years were liberating in a way I can barely imagine now.”

West, a columnist for The Guardian newspaper whose 2016 memoir Shrill was a New York Times best-seller, served as the keynote speaker for Columbia College Women’s History Month programming, which all centered around the theme of “Building Women’s Futures: Women and Work in the 21st Century.”

For West, a feminist and body image activist who uses her writing as a megaphone for these issues, internet “trolls” — commenters who post abusive messages about other people online — are a way of life in her workplace.

Her experience is not unique among female writers.

“Not only are we expected to grow thicker skin and get used to it, but (we’re told) it’s a part of the job, that it’s normal,” West said. “It’s not normal.”

Earlier in the day, during a session with Columbia College associate professor of history Dr. Tonia Compton’s Women’s History class, West worried the stream of abuse reserved for women has a chilling effect on younger writers seeking a platform to express themselves.

She heard from students about confronting trolls, from arguing with them to taking down Tumblr microblogging pages so they wouldn’t be able to access personal information.

“When you feel invisible forces like this holding you back, believe yourself,” West said. “It is not part of your job, no matter how effectively the idea that it is has been coded into our society. You are not imagining it. Sexism is real. It has been documented over and over and over again. You are already experiencing it. You have experienced it your entire life, and you will experience it your entire life. The sooner you realize that, the sooner you can start fighting for yourself and the people around you.”

Compton, who chairs the Columbia College Women’s History Month Committee, felt West’s voice was an important one to include because of the prominence she has earned with her work and the abuse she’s endured from being an outspoken woman along the way.

“If you’ve spent any time online in the last year or so, you’ve seen arguments about equal pay and harassment in the workplace,” Compton said. “We felt like this was a conversation that needed to happen on campus. What are the ways in which gender and work intersect? What are the challenges that we’re facing now and going forward? And how do we prepare our students and communities to make things better?”

During West’s talk in Bixby, which preceded a question-and-answer session and a reception at which West signed copies of her book, she outlined several recent examples of sexism highlighted in popular media, including an experiment undertaken by two co-workers — one male, one female — in which they switched names on their email signatures for a week to see what happened.

The man suddenly found his clients rude, condescending and unwilling to take his advice. The woman had a much easier time than she was used to experiencing.

“You have to be invested in not paying attention to believe that this isn’t real,” West said. “One of the most insidious features of sexism is the endless demand that its victims prove its existence.”

West has a national following with her writing, two more books in the works and is in the midst of developing a TV show based on Shrill.

She feels the privilege of being able to lend voice to the voiceless. She urges more people to take that step.

“The more we are afraid to tell our own stories, the more that void is filled by opportunists and people who want to tell a different story,” West said. “Support people who are speaking out about their experiences. Because they really need backup.”