Pascale White had already beaten cancer once before, when she was a toddler. It took three years of chemotherapy, but she was able to overcome the acute lymphoblastic leukemia that attacked her blood and bone marrow. 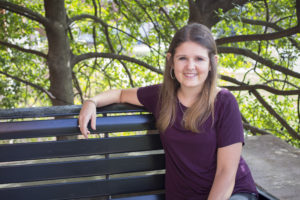 Less than two years later, it came back. She was only 6 and, for the second time in her young life, battling for her existence.

The relapse is the one that sticks with her.

“I remember getting stabbed a lot for getting blood drawn. That was never fun,” Pascale says. “It affects you as a child. Any time, even today, that I have to get my blood drawn, I freak out about it. It’s hard to me, still, to even step into a hospital.”

Her second bout involved chemotherapy, whole-body radiation and bone marrow and stem cell transplants over the course of three years.

“There were two years where many times they said she would not make it through the night. It was a nightmare and a terrible experience for everybody,” says Sylvie Carpentier, Pascale’s mother. “I have seen a lot of kids pass, that unfortunately just did not make it, but she pulled through. We are truly blessed.”

The time in the hospital put Pascale behind other students her age when it came to schooling and, as a result of the intensity of the radiation she endured, doctors said she may never be able to learn normally.

But she caught up through home-schooling, graduated from Rock Bridge High School in Columbia, Missouri, headed to Moberly Area Community College and transferred to Columbia College three years ago.

On April 29, she will walk across the stage during the commencement ceremony at the Southwell Complex with her Bachelor of General Studies degree from Columbia College, with minors in psychology and business.

“Pascale’s Pals,” the volunteer organization her family created in her name during her first hospital stay, raises money and provides services for patients and families who are facing similar situations to what Pascale and her family endured. Pascale, herself, still serves as the inspiration for the organization, an example of overcoming the odds time and again.

“It’s definitely made me appreciate life a lot more,” Pascale says. “It definitely makes you think about how much you had in the past and how much you want to give back to the families you see struggle like you did.”

Throughout the course of one semester, Columbia College’s Ether L. Bruce Math Center had a regular guest: Pascale White, who needed help in statistics.

“I was in there literally every day for two hours,” Pascale says, with a laugh. “They were very patient with me. It challenged me to do and learn on my own, too.”

This was just the sort of attention Pascale desired when she was looking for a school at which to earn her bachelor’s degree. She was concerned she would get swallowed up on a larger campus and valued Columbia College for the free tutoring opportunities and the one-on-one interactions with professors.

It didn’t hurt that she had some familiarity with one of the math center tutors: Tricia Vogt, who was her sixth-grade homeroom teacher at Columbia Catholic School.

“She was not going to fail at anything. Challenges were just not a problem for her,” says Vogt, who works with coordinator Susan Hughes at the math center. “That’s kind of what her norm was, to be challenged.”

The Elizabeth Toomey Seabrook Writing Center & Tutoring Services helped hone Pascale’s writing skills. Coordinator Kate Denehy says Pascale is the sort of student she loves to see come through the center, one who knows exactly what she wants to get out of tutoring sessions and follows up.

“She’s one who just showed up on campus and decided she was going to take advantage of all the resources she could and make it the best experience she could for herself,” Denehy says. “She’s really done that.”

Pascale says the tight-knit campus community at Columbia College helped her make lasting friendships and forge meaningful connections. The Grossnickle Career Services Center also helped her land two internships that gave her some advance experience in the types of professions she’d like to pursue after earning her degree.

She left an imprint on the campus as well.

“Every student whom you’ve worked with, who walks across that stage, is a pride point,” says Dr. Terry Smith, who taught Pascale in his American Government class in the fall. “But folks like her, to know a little bit about her story, they’re kind of a gift to you.”

It started out with bake sales put on by Carpentier and her friends, to raise money for the sort of everyday necessities they saw during Pascale’s hospital stay.

Extra beds in the rooms, in case family wanted to spend the night. Televisions in all the rooms, so the patients no longer had to reserve the one communal TV that the whole ward shared.

In the nearly 20 years since Pascale’s Pals started, its scope has grown exponentially.

“My mom wanted to be able to help families in the future with what we’d gone through,” Pascale says. “It just branched off and more and more people started to help out, too, so we were able to do more. Anywhere in any way, we try to help out.”

Today, Pascale’s Pals raises money for gift baskets, emergency needs, hospital improvements and other services for patients and their loved ones at the University of Missouri Children’s Hospital in Columbia.

The organization brings Santa Claus to the pediatric patients on Christmas morning. It has undertaken projects such as renovations to the Neonatal Intensive Care Unit and equipping a new Inpatient Pediatric Rehabilitation Center.

“It’s really incredible. Right now, it has a will of its own,” says Carpentier, a chiropractor in Columbia. “Everybody collaborates. People have a lot of goodness.”

This year’s annual Pascale’s Pals fundraising gala drew 930 people on March 10. Carpentier says interest for the event was so high that she had to stop taking table reservations a month in advance.

Pascale was the main attraction, as she is every year. People always want to meet the driving force behind Pascale’s Pals, the two-time cancer survivor and soon-to-be Columbia College alumna.

“I’m very honored to be the image of it, because I am a cancer survivor. So a lot of people look up to me that way,” Pascale says. “For our organization to be able to do that for the families and give them hope, it’s such an honor. We’re proud to be able to do that. Without the support of the community, all our volunteers, the hospital, we wouldn’t be able to do it.”