Randy Sanchez was in for a bit of a surprise during a recent campus tour. He and the group he was with stopped to look at a mural containing scenes from days of Columbia College past, and Sanchez found a picture of his younger self and a couple of his classmates staring back at him. 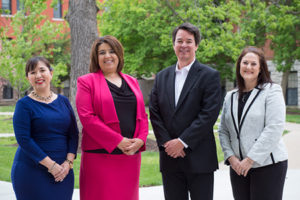 The faces had changed considerably since his graduation in 1983, as had the Columbia College campus he was touring. But the friendships remained.

“Who would’ve thought that these guys are going to be my lifelong friends?” Sanchez said at the Alumni Awards Banquet and Presentation on April 21. “They were in my wedding, I was in their weddings. Long-lasting friendships are probably the thing I cherish the most about Columbia College. I wouldn’t give it up for the world. I had such a great experience.”

Sanchez and the other three alumni award winners all stressed the role Columbia College played in shaping who they are during acceptance speeches in front of a crowd of about 70 people at the Dulany Hall Banquet Room. President Scott Dalrymple, Alumni Relations Director Ann Merrifield and Columbia College Alumni Association Advisory Board President Joshua Muder ’99 helped honor the evening’s award recipients.

All received standing ovations after their acceptance speeches.

Nichols, who earned both her bachelor’s and master’s degrees in Criminal Justice Administration from Columbia College, is now a regional recruiter for the school and an adjunct criminal justice professor.

Coming from a military family, Nichols has made it her life’s mission to help support servicemembers and veterans through philanthropic enterprises such as Central Missouri Honor Flight and Missouri Patriot Paws, an organization that works to train and provide service dogs for veterans with post-traumatic stress disorder and traumatic brain injury.

“Working with servicemembers from pre-deployment to post-deployment, you see the families working together, but you also see the sacrifices they’re making as well,” Nichols said. “When they return with disabilities related to their service, it’s our responsibility to serve them.”

Day moved from her home in Azerbaijan to the United States in 2000, with only $43 in her pocket. After earning a master’s degree in Economics from the University of Arkansas, where she had received a scholarship from the prestigious Edmund S. Muskie Graduate Fellowship Program, she earned a Master of Business Administration from Columbia College and eventually started her own Edward Jones investment company branch in Monticello, Arkansas.

Osborn never thought she wanted to be a teacher until taking classes at Columbia College. Former Dean for Student Affairs Faye Burchard asked her to volunteer reading to elementary schoolers and, while Osborn came away from the experience confident she couldn’t handle teaching second graders, she also took away a passion for spreading the joy of reading.

The whole time she lived in Hughes Hall on campus, she never realized Jefferson Middle School sat right across the street. Now, she teaches reading there.

“Instead of giving them a book, it’s teaching them to choose a book,” Osborn said. “It’s kind of like, ‘Do you give someone a fish or teach them how to fish?’”

This past year, she was selected as one of 11 education leaders nationally to be a Heinemann Fellow. She plans to use the fellowship to conduct research projects in the classroom and meet with other educational leaders to learn teaching methods and problem-solving tactics.

She said Columbia College remains an integral part of her life, through the support of such figures as associate professor of education Dr. Teresa VanDover, First Lady Tina Dalrymple — who has been instrumental in securing book donations to Jefferson Middle School — and associate professor of human services Dr. Lia Willis, who puts on programs with Osborn’s students to show them the attainability of a college education.

Osborn closed her speech by reading a poem she wrote about her time at Columbia College.

“I am those moments, seeds planted long ago in a moment called Columbia College,” she concluded.