Keynote speaker Lieutenant General Richard Harding urged attendees to be mindful of those men and women who have sacrificed themselves for the cause of freedom during his remarks at the Columbia College Military Recognition Day ceremony May 25. 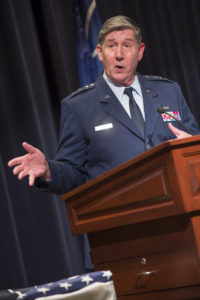 Harding, a 34-year Air Force veteran, former Judge Advocate General and current member of the Columbia College Board of Trustees, implored the near-capacity crowd at Bixby Lecture Hall in the Brouder Science Center to use Memorial Day to remember the price paid by countless service members whose stories don’t reach the headlines or get depicted in popular media.

“Hollywood’s great about projecting the image of the soldier who charges into the machine gun nest,” Harding said. “But sometimes we lose sight of the less obvious people we also want to remember on Memorial Day.”

Harding highlighted stories of service members killed in training maneuvers, through illness in the combat arena and through friendly fire. He told the story of a court reporter from his corps that he sent to Afghanistan, who suffered traumatic brain injury after the vehicle in which he was traveling was launched into the air by a blast and slammed back to the earth.

The sergeant emerged from the vehicle and provided covering fire, his actions saving many lives and earning him a medal of valor that Harding had to convince him to accept. The sergeant doesn’t remember anything about that day after the crash.

“To this day, he cannot remember at lunch time whether he had breakfast. And, if he did, what he may have eaten,” Harding said. “While I sent a very literate, smart (non-commissioned officer) over there to be a court reporter, to transcribe statements, he can’t write a complete sentence today. Paragraphs elude him. He’ll be cured someday in the future. I’ve got to have that faith. But we need to remember his service on a day like Memorial Day as well.”

Columbia College’s 10th annual Military Recognition Day ceremony, held four days before Memorial Day, recognized the contributions of all the college’s alumni, students, faculty and staff who have served or are currently serving in the military. Columbia College serves more than 9,000 service members, veterans and military dependents each school year.

The event also included recognition of this year’s 11 recipients of the Colonel Charles E. McGee, Colonel Mike Randerson and Ousley Family Veterans Service Center scholarships, all of which benefit students at Columbia College who are service members, veterans or military family dependents.

The Ousley Family scholarship was established in 2011 and, with this year’s five honorees, has been awarded to 19 students since then. This year’s recipients were: Mark Bayliss (Evening Campus), William Delvalle (Orlando), Michael Guthrie (Whidbey Island), Donald Hines (Lake of the Ozarks) and Christina Yarborough (Hunter Army Airfield). Bayliss, who was in attendance, just finished a six-year stint as an Army National Guardsman and is enlisting for another six. He is pursuing a Bachelor of Science in Biology with the aim of going to nursing school. 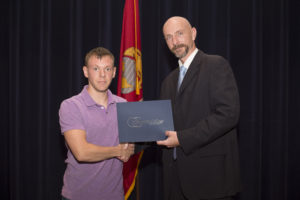 Bayliss spent some quality time with 1997 Columbia College alumnus Greg Ousley and his family before the ceremony.

“It’s incredible what they’re doing for veterans,” Bayliss said. “A lot of times you leave active duty or come back from deployment and you’re kind of lost. You kind of wander. You don’t know how to go to college, find a job. A lot of these programs that people like the Ousleys have created and helped fund are immaculate. They’re saving a lot of lives out there.”

The three recipients of the Charles E. McGee scholarship were Robert Gustafson (Crystal Lake), Heidi Raymond (Elgin) and Cristhian Restrepo (Orlando), bringing the total number of honorees since its establishment in 2010 to 14. 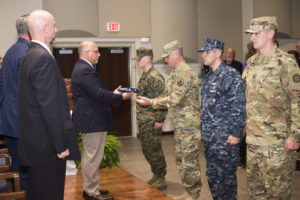 The event concluded with the playing of the bugle call taps, which holds a special resonance for Columbia College President Scott Dalrymple.

A trumpet player as a youth, Dalrymple would be called upon to play taps at Memorial Day celebrations in his home of Waterloo, New York, and the surrounding communities.

“It really affected me more than anything,” said Dalrymple, whose father served in the Army. “I’d even call it a spiritual experience, doing that. I really was just affected by Memorial Day ceremonies, even as a kid. I took it seriously. And I still do, very much.”

Columbia College also served as the host to the finale of the Salute to Veterans Parade on Memorial Day. The parade ended at R. Marvin Owens Field, with parachute teams from the US Army and Canadian Armed Forces landing on the field.