A thought occurred to Ryan Frappier as he watched his twin brother, Matt, stride across the stage to receive his Presidential Award during the morning Columbia College commencement ceremony at Southwell Complex on April 29. 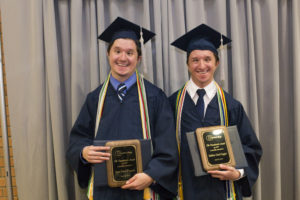 Matt and Ryan’s academic careers mirrored each other during their time at Columbia College, with Matt pursuing a Bachelor of Science in Business Administration and Ryan seeking a Bachelor of Science in Computer Science. Both maintained perfect 4.0 GPAs, and both stayed active in student organizations: Ryan as president of the Computer Science Club and Matt as a standout member and officer of Collegiate DECA.

Sure enough, once Columbia College President Scott Dalrymple was through singing Matt’s praises, it was Ryan’s turn to take the stage as a Presidential Award winner.

“It really means a lot,” Ryan said. “Going here, everything I really liked about this college, I tried to put in a lot. I feel like I’m being recognized, and it feels really great.”

Abigail O’Brien and Anna Ralls joined the Frappiers as recipients in the morning ceremony, and Kacie Naros took her spot on the stage with Dr. Dalrymple in the afternoon.

O’Brien used her time on campus to become a respected student leader and two-time Student Leadership Award winner while earning a Bachelor of Science, and Ralls earned a Bachelor of Arts with Distinction for a poetry cycle project under the mentorship of Dr. Peter Monacell, chair of the Language and Communication Studies department.

Naros completed her coursework for a Bachelor of Arts in Human Services at Columbia College-Jefferson City, while also working as a process coordinator at the location. She said she first started eyeing the Presidential Award when she received her Associate in Arts from Columbia College at the 2015 commencement festivities and saw that year’s winners honored on stage.

“I was like, ‘What do I have to do to get this award?’” Naros said. “Luckily I was already in a place where I could achieve it. So I went ahead and pursued that, pretty hardcore. It got intense sometimes.”

Naros has worked at Columbia College for three years but decided to pursue her education there before becoming an employee. She wants to become a Licensed Professional Counselor, a career path she may not have chosen if not for her academic advisor at Columbia College.

“There was just this sense of excellence and prestige associated with (Columbia College),” Naros said. “I feel like I have the world at my feet. I’m just ready to go on to the next step in the journey. I’ve always had a passion for helping people and advocating for what is right. Originally I had thought that my passion was in education, but my advisor said, ‘You really have a knack for helping people and making them feel comfortable. So maybe we should go this way.’ It was definitely a fit.”

The Frappier brothers have promising futures lined up as well.

Ryan, who interned at Google over the past two summers, starts a full-time job with the company in July. Matt plans to pursue his Master of Business Administration with a marketing analytics concentration at the University of Missouri while also working as marketing manager at Columbia, Missouri-based company EnergyLink.

The two lived in the same suite in Miller Hall for all four years of college and spent their senior year as roommates.

“I can’t help him with computer science. No way,” Matt said, with a laugh. “But what I could be there for was listening to what he was doing and just offering advice, giving any support that I can. We’ve always been together throughout the whole process.”

Both Matt and Ryan were born with visual impairments, so severe that Matt says his vision is 20/400. He hopes he and his brother can serve as inspirations to students facing similar obstacles.

“You may have a physical disability, but that doesn’t mean your mind isn’t sharp,” Matt said. “It’s a way of showing that it can be done.”