For 30 years, Jack Barnhouse taught English literature and composition as an adjunct instructor for the Columbia College Evening Campus. 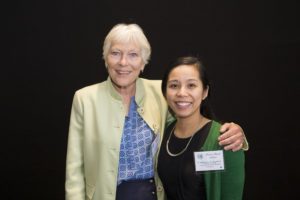 Carla McFarland and Kim Evangelista, one of the two recipients of the 2017 Barnhouse Memorial Scholarship. McFarland’s husband, Jack Barnhouse, was an Evening Campus instructor for 30 years.
(Photo by Kaci Smart)

Barnhouse was one of the first Evening Campus instructors at the school. It was a second career for the
Army veteran and former CIA employee, and he had a special place in his heart for the type of students he encountered in the Evening Campus.

“They worked all day long and then would come to school. How many people are willing to do that?” says Carla McFarland, who was Barnhouse’s wife. “Columbia College provided him an opportunity to do something that he was passionate about for 30 years.”

When Barnhouse’s daughter from a previous marriage, Jackolyn Lois Barnhouse, died in 1998, he and McFarland created a scholarship in Jackolyn’s name to benefit a female Evening Campus student. When Jack passed away in 2013, McFarland expanded the scholarship so it could benefit two students a year and had it renamed the Barnhouse Memorial Scholarship in honor of Jack and Jackolyn.

“They were both English teachers. They both shared a love of writing,” says McFarland, a retired Columbia Public Schools teacher herself.

Kim Evangelista has been awarded the Barnhouse scholarship each of the past two years. The single mother from Mexico, Missouri, is raising two children while studying to receive an English literature degree with a middle-school education certification from Columbia College. She has been taking online and hybrid Evening Campus courses at the school since 2013 and hopes to graduate in the next two years.

She is just the sort of recipient Barnhouse and McFarland envisioned.

“She seems very intelligent. She’s very friendly. She’s very open,” McFarland says. “She’s trying to look for a way to provide for her kids. She works a job, goes to school fulltime and raises two kids. That’s what he admired so much about his students.”

Evangelista got the chance to speak with McFarland at the Honors and Awards Luncheon in Dulany Hall on April 11, just as she did last year. She says it’s important to her to be able to let McFarland know how much the philanthropy of all who contribute to the Barnhouse scholarship means to her.

It’s just how Jack and Jackolyn would’ve wanted it.

“It’s been very rewarding,” McFarland says. “I enjoy being able to help people. You know that, later on, they’ll turn around and do the same thing.”