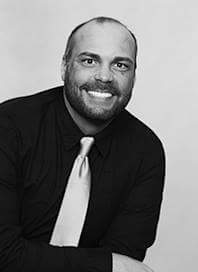 Christopher Itai Cardona was a welcome daily presence for staff members as he pursued his degree at Columbia College-Springfield, and not only because he regularly brought in coffee to share.

They could see how dedicated Cardona was about completing his Bachelor of Arts in Business Administration, how studious he was, how important education was to him, even to the point that he would drive to the college’s Rolla and Fort Leonard Wood locations for classes that Springfield did not offer.

That persistence paid off in the spring of 2013, when Cardona graduated with a perfect 4.0 GPA. Columbia College-Springfield director Kathy Gress got to know him well during their frequent interactions and still corresponds with Cardona.

“He was kind of a champion for the underdog. He very much cared about people and their success,” Gress said. “He would work with the community, and he was very much an advocate.

“It was absolutely incredible and inspiring, especially to see someone with what we consider a disability — but he definitely didn’t — go as far as he did and have that kind of aspiration and the intelligence and the guts to do it. There just wasn’t anything he couldn’t do.”

In his 20s, Cardona underwent surgery to remove a non-cancerous tumor from the main nerve leading from his inner ear to his brain. He says he faced the normal financial and scholastic challenges every student faces, nothing more, while achieving his bachelor’s degree at Columbia College, then a Master of Arts in Applied Linguistics with a specialization in foreign language pedagogy and a Ph.D. in Religious Studies at other institutions.

“I made my education paramount to any other aspect in life,” Cardona says. “I did not study for tests. I studied to learn. Once I learned the material, the tests were not a challenge.”

Cardona is putting his Columbia College degree to good use as a property manager for two companies in southern California, where he lives. Already a certified home inspector and property manager, Cardona is also studying to become a licensed real-estate agent and plans to begin pursuing a Ph.D. in Organizational Leadership next spring.

He is also an active leader in his community of Desert Hot Springs, California. He volunteers for the LGBT Center as a deaf interpreter for its events and, last year, he served as the chair of the Mayoral Committee on Human Rights, which brought the community together and organized vigils to honor victims of violent crimes. Cardona has led voter registration efforts over the past two years, and he worked with the chamber of commerce to organize forums in which residents could ask questions of city council candidates.

Cardona also started a program to feed disadvantaged children in his community over the summer months when they’re not in school, and the Committee on Human Rights organized and hosted forums to facilitate a dialogue between community members and local police officers and educate at-risk youth on opportunities to get involved in their community. 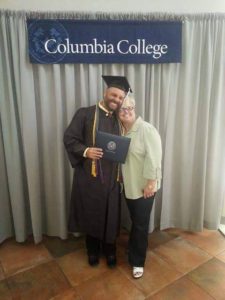 Cardona and his mother, Raquel Joyce, on the day of his graduation at the Columbia College main campus. (Photo submitted)

“I felt thankful and unworthy of such commendation, as there are those who do much more than I,” Cardona says. “I have been blessed in my life and I want to bless others by helping make the world more fair and by making our children a little less hungry. I want to inspire others to get involved and to just do what they can. I wish I could volunteer more.”

Cardona says he learned from his mother, Raquel Joyce, how to “do what we can for others with no expectation of return.” He is supported in all his efforts by his fiancé, Carlos, and the two have recently taken in Cardona’s niece and nephew, whose parents passed away.

Cardona is making them read novels over the summer to get ready for junior year of high school. He wants education to be just as important to them as it has been to him, as it was for the people who have helped him along the way.

“(The Columbia College-Springfield staff) made me want to go to school,” Cardona says. “I wanted to see them. I wanted to make them proud. They read my papers. They helped me navigate tough coursework. They allowed me to tutor fellow students. They became my friends who I wanted to see daily.”