Watching her team drop its season opener told Columbia College softball coach Wendy Spratt pretty much all she needed to know about the 2017 Cougars. 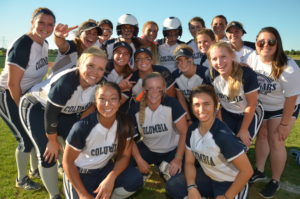 Columbia College, coming off a season in which it missed out on postseason play, took on reigning national champion Oklahoma City University on a neutral field in Fort Worth, Texas, on Feb. 10 to kick off both teams’ seasons and suffered a 2-0 loss.

But it was a loss in which the Cougars put more runners on base than Oklahoma City and chased the Stars’ starting pitcher after four innings.

The Cougars lost only six more times during the rest of their 48-7 campaign, winning both the American Midwest Conference regular-season and tournament champions, advancing to their first NAIA World Series since 2010 and finishing fourth at the national championship tournament, their best World Series finish in program history.

Columbia College posted a 23-1 record in the AMC, and four of its seven losses came to teams that finished in the top 25 nationally, including national champion Oklahoma City, runner-up Corban and third-place team LSU-Alexandria. Another came to Missouri S&T, an NCAA Division II team.

“They believed in themselves and each other. We had that confidence going in, before the season started,” said Spratt, who was an All-American as a player for the Cougars and has led them to an 832-392 record over 23 years as head coach. “They knew the potential of the team that we had. Everybody wanted to get better every day, and they worked hard because they knew that we could win a national championship. That was our goal all year, and they really believed they could do it.”

After the close call against Oklahoma City, the Cougars swept their way to six wins and the Gulf Coast Invitational gold bracket championship in Gulf Shores, Alabama, at the beginning of March, run-ruling then-No. 12 Campbellsville for the title.

Columbia College had lost all five games at Gulf Shores the year prior.

“We saw how well we could all play and knew that, if we kept that up, we would end up where we did this year,” said sophomore infielder Molly Carter, a Columbia native. “We put in a lot of hard work, because we knew we had high expectations.”

The Cougars combined a potent offensive attack up and down their lineup with a devastating one-two punch in the pitching circle to make history this season.

The first three batters in the order all earned All-America honors: leadoff hitter Carly Spalding and Carter, the three-hole hitter, were first-team All-Americans, while No. 2 batter Theresa DeCosty was a second-team All-American. 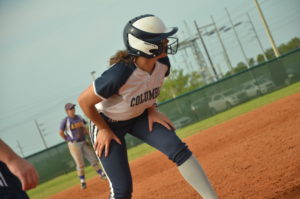 Sophomore Molly Carter set single-season program records in home runs (14) and runs batted in (87) for the Cougars this season.
(Photo by Cindy Potter)

Spalding set Columbia College single-season records in hits (95) and stolen bases (57), while Carter set program records in home runs (14) and runs batted in (87). DeCosty hit .439 for the season, with 48 stolen bases in 50 attempts.

“We were fast and aggressive on the bases and caused havoc for other teams,” Spratt said. “You got Molly up, she’s going to put it in fair territory and hit it hard. You’ve got two girls with exceptional speed that can run the bases. It didn’t happen very often that one or the other wasn’t on base when Molly came up. Therefore, it set up her RBI record.”

In the circle, Paxton Welch and Lauren McCroskie each won more than 20 games and maintained earned-run averages of less than 1.50, as the Cougars outscored their opponents by an average of 5.4 runs per game. Welch went 23-5 with a 1.44 ERA, and McCroskie was 22-2 with a 1.40 ERA.

Spratt said that, while in years past Welch carried the team in the postseason, McCroskie was very effective at sharing the load this year. The two had skill sets that complemented each other, and graduate assistant and pitching coach Jordan Logan called pitch sequences that played to their strengths.

“We were kind of able to feed off each other. If one of us was having a bad day, we were able to pick each other up,” Welch said. “We are both good pitchers, but we’re different styles. She (pitches) in a little more and has a better offspeed than I do, but I go out a little more and mine might break a little more than hers do. It just kind of worked out to where we could go back and forth and switch teams up with that difference.”

The Cougars are losing a lot of talent to graduation after this season, with DeCosty, McCroskie, Spalding and Welch all moving on. But Columbia College also returns the core of a lineup that includes Carter, .400 hitters Allyson Metz and Rachel Sullivan and run producers Alexandra Linck and Karli Leeper, as well as pitcher Kaitlyn Nottelmann, who posted a 2.27 ERA over 24 2/3 innings as a freshman this year.

They’ll get the chance to build off the success of the 2017 Cougars, who reached heights no other Columbia College softball team had before.

“It’s just been a really special year. It was like a family,” Spratt said. “The coaching staff, we talked about it daily if not weekly, that this was a special team, this was a special time. We were going to enjoy every moment of it, because it doesn’t happen every year.”