Angela Crutchfield had to hear her name announced twice before she fully realized what had happened.

Crutchfield, standing on stage at the Marriott St. Louis Grand Hotel last Nov. 19 with other finalists at the March of Dimes’ Nurse of the Year Awards Gala, needed a moment to let it sink in that she had won the trophy in the Licensed Practical Nurse category. 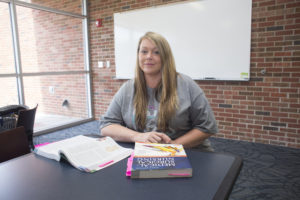 “I was like, ‘Wait … you mean me?’” Crutchfield said. “I didn’t have a speech. I didn’t have anything. My son, he’s a big sports player, he’s, like, yelling from the audience.

“It felt really good. It was unexpected.”

Crutchfield has been an LPN for 14 years and currently works in MU Health Care’s inpatient neurosciences unit. She is pursuing her Associate of Science in Nursing degree at Columbia College — with an expected graduation date this December — and plans to move on to a Bachelor of Science in Nursing.

She was one of more than 600 nurses nominated for the March of Dimes awards last year, due to her efforts when she was working with foster children in MU Health Care’s otolaryngology department. She noticed that some of the foster children’s information was still accessible by former foster parents or their biological parents, some of whom had been removed from the children’s lives because of abuse or other forms of neglect.

From Crutchfield’s awareness, MU Health Care was able to team with the Family Support Division in the state Department of Social Services to come up with a new system.

“It was this red flag. The university was like, ‘We never thought of that,’” Crutchfield said. “We kind of figured out some different methods and policies to put forth and a phone number hotline to call if we had somebody who needed immediate removal of being able to access that child.”

After her nomination for the March of Dimes award, Crutchfield had to fill out a questionnaire about her qualifications and aspirations in the field of nursing. Not her strongest suit, given that she is not used to stepping into the spotlight and bragging about herself.

So, when the literal spotlight shined on her during her acceptance speech at the gala, it was an even more unusual — yet greatly appreciated — moment.

“The recognition you get from patients is important and what keeps you going,” Crutchfield said. “But when, also, your peers recognize that, it’s kind of a different feeling. It gives you a feeling of accomplishment for sure.” 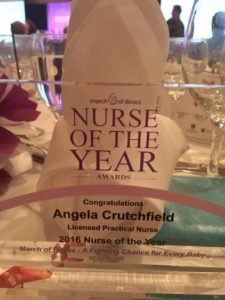 Crutchfield somehow finds a way to fit work, school and being a mother of four children into her jam-packed schedule. She juggles hospital shifts and tries to secure at least two “off” days per month, though she still has studying and other tasks to fulfill.

She said she appreciates the flexibility Columbia College has afforded her while she pursues her associate degree. That, combined with the reputation of the school’s nursing program, has her positioned well for the future.

“I’ve had some charge nurses and management (at the university) saying that they actually prefer to hire from Columbia College over some of the others,” Crutchfield said, “because of the hands-on and bedside experience and the things that we’re taught here as far as patient interaction, instead of just focusing on the book knowledge. They do a lot more clinical application through this program than, I think, some of the other ones.”

Crutchfield hopes that, by furthering her education in the field, she can be more informative as a go-between for doctors and patients, someone who can interact with patients and relay diagnoses and instructions from doctors in ways that are easily accessible.

She told the crowd at the March of Dimes gala that, because she’s in school to become a registered nurse, she may be back as a winner in an RN category at some point in the future.

Maybe she’ll even have a speech prepared.

“The nursing profession can be very tiring. You can feel like you’re not making a difference,” Crutchfield said. “So it kind of rejuvenated me, actually, after over a decade of nursing. It made me almost feel young in this career again. Like, ‘I can do this. We can make a difference.’”