The art of advocacy 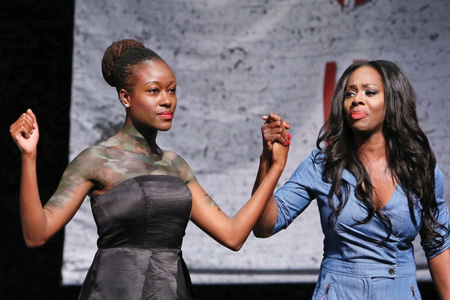 Editors Note: This story was included in the latest edition of Affinity Magazine. Click here to check out the magazine in its entirety!

A love of painting came naturally to Renee Hamilton-McNealy ’12. As a child, she would go to art galleries with her mother and discuss the works they’d see. She painted in the backyard with her father. From that passion, she branched out as a makeup artist and aesthetician, which flowed organically into an interest in body painting.

After all, body painting is just another form of fine art, using the human body as a canvas.

“What I gravitate toward is usually healing experiences for people beyond just paint to skin,” Hamilton-McNealy says. “It’s a whole beautiful world out there. Everybody I’ve worked with always felt like it was a therapeutic experience for them.”

Body painting is a mode of expression for both artist and subject. Hamilton- McNealy learned about the power of body painting while assisting world-renowned artist Trina Merry at a workshop at the San Jose Museum of Art, then brought her own works to life during the Ms. Veteran America competition last  year.

In the talent competition, she performed a spoken-word piece about women serving in the US Army since the time of the Revolutionary War while painting an American flag on a model. In the finals — she was one of 10 chosen out of about 400 competitors — she presented a video of her art that raised awareness of the plight of female veterans who become homeless after serving, while a model she pre-painted in a camouflage pattern stood on stage.

“I was showing that even the art doesn’t cover up the camo,” Hamilton-McNealy says. “It enhances it, sheds more light on it.”

It’s a cause that’s near and dear to Hamilton-McNealy’s heart. She’s a master sergeant in the Army Reserves in her 18th year of service, 10 of them on active duty. Through her work with the Final Salute foundation, which helps find safe and suitable housing for homeless female veterans and their children, and her advocacy as a Ms. Veteran America contestant, Hamilton-McNealy strives to make her art imitate life. 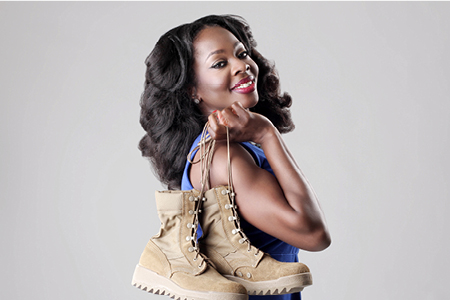 Hamilton-McNealy was not aware that the Army could pull her out of school when she got called up for active duty shortly after Sept. 11, 2001. She had just lost her mother and wanted to keep her commitment to earn her degree, but she wasn’t sure of her next step. She visited the education center at Fort Stewart, Georgia, where she was serving in support of Operation Enduring Freedom. There, a representative from Columbia College offered her a solution.

“They explained how it could work, even though I was on active duty,” Hamilton-McNealy says. “Due to one of the reps being really helpful and showing the way, learning I could take some classes online and go to the classroom — which is what I truly wanted — it worked exceptionally well with my schedule and how I learned.”

Hamilton-McNealy earned her Associate in General Studies in 2004 and served eight more years of active duty as a financial manager/budget analyst, four in Atlanta and four in the San Francisco Bay area in California.

“I feel that what is great is women who are building themselves prior to transitioning [from military to civilian life], and education is a part of that,” Hamilton-McNealy says.

She serves as a mentor for around 2,500 non-commissioned officers through a Facebook group. She has a go-to message when someone asks her for advice on how to pursue a degree along with a military career.

“All I could think about is there was a school I went to when I just got called into active duty, lost my mother and got pulled out of school that still helped me focus and move ahead,” Hamilton-McNealy says. “I didn’t go to Columbia College for my MBA, only because I wanted to go in person. But if that was an option where I worked, I would have, because it was a great support beyond education at the time.

“I think it’s a good school for anyone who’s still serving to be able to go to.” 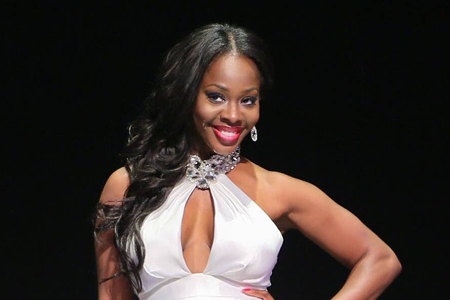 When she applied for the Army Entertainment’s traveling Soldier Show as a volunteer, Hamilton-McNealy was thinking she’d fit best in the hair and makeup department. The director had another idea.

In the production there was a Tina Turner “Proud Mary” number for which Hamilton-McNealy would be perfect. So she found herself performing and in charge of hair and makeup on a 10-month nationwide tour of Army bases and other communities. They worked 16-hour days for 75 minutes on stage, singing and dancing for servicemembers and their families, sharing the Army’s message of “ready and resilient.”

“It was just awesome serving primarily the military and veteran community, but also children, youth, the homeless, Wounded Warriors,” Hamilton-McNealy says. “You had soldiers come together like a family to perform.”

At one stop, she met a man who said he came to the show every year, but this one would be his last. He planned on taking his life. He changed his mind after hearing the messages of affirmation offered by the Soldier Show.

“Seeing the show really changed him,” Hamilton-McNealy says. “That just made the whole thing valid, if nothing else ever did. Just another way to reach out to people.”

That’s how she viewed her Ms. Veteran America candidacy. She joined a dedicated group of women from all branches and levels of the military to showcase “the women beyond the uniform” and benefit homeless female veterans and their children through Final Salute. Hamilton-McNealy raised nearly $3,000 on her own. The competition was secondary. The message was foremost.

“It made me want to cry. To see a population of other women who were just as driven, it was just phenomenal,” Hamilton-McNealy says. “It felt good to come together and say, ‘We have these solutions to provide support for other women veterans.’ It extended beyond just the sisterhood of the Army and opened up to all other branches. It just felt really infinite, and something that’s truly needed.”

Hamilton-McNealy is lending a helping hand to a friend in the Air Force who is running for Ms. Veteran America this year. She’s willing to offer advice or organize events for any other candidates that call on her. She hasn’t exactly ruled out another run, but she also feels a desire to welcome more women into the fold.

“I think the journey was so honorable I’ll make room for others, but be the support that they need for their own given journey,” Hamilton-McNealy says. “I’ll be an ambassador, always.”