The two years she spent at Christian (now Columbia) College continue to hold great resonance for Dr. Ruth Wehmer Hawkins ’67, no matter where her life has taken her. 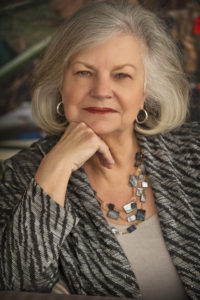 Dr. Ruth Wehmer Hawkins, a 1967 alumna of Christian College, is one of this year’s Arkansas Women’s Hall of Fame inductees.
(Photo submitted)

After a stint on the Christian College Microphone newspaper staff and encouragement from instructor Linda Lusk helped kindle a flair for journalism, Hawkins earned her bachelor’s degree from the University of Missouri School of Journalism and worked as a television and newspaper reporter in Virginia after graduation.

When Hawkins, a St. Louis native, and her husband moved to Jonesboro, Arkansas, to be closer to home in 1978, she became head of the advancement division at Arkansas State University, using skills she learned under Christian College development director Charles Mai and alumni relations director Jane Crow the summer after her graduation.

She fell in love with the researching and preservation of historic sites as the executive director of the Arkansas State University Heritage Sites program — a title she created — which calls back to her days helping Allean Lemmon Hale research an update to Hale’s book Petticoat Pioneer: The Story of Christian College.

All of Hawkins’ professional passions have something in common, besides the fact that she was able to cultivate them while earning her Associate in Arts degree at Christian College.

“It’s all about telling a story,” Hawkins said. “Now, I’m telling the stories of important heritage sites, but I’m telling them through doing the research on why they’re significant, then developing the exhibits and interpretive materials for people to come and visit and learn to appreciate those sites.”

Hawkins’ story has earned her a spot in the Arkansas Women’s Hall of Fame class of 2017, a collection of nine women — including famed poet Maya Angelou — and one group of women who will be honored with an induction ceremony on August 24 in Little Rock.

“This is obviously a major honor,” Hawkins said. “I feel a little guilty in receiving it, because I have such a great team that I’ve worked with over the years. They do all the work, and I get to be the front person and take all the credit.

“It certainly means a lot to me because it’s the women’s hall of fame, and I’ve been an advocate for advancing the roles of women for a long time, starting with going to Christian College.” 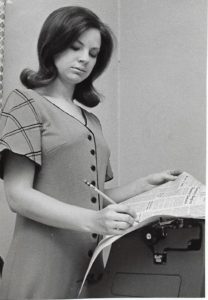 Hawkins came by it naturally: her mother, Hazel Snoddy Wehmer, was a 1941 graduate.

When Hawkins was young, the family would make trips to Columbia, and Wehmer would always take them by campus.

“I would see all these young women walking by with their heels and their hose and their hats,” Hawkins said. “That was back in the day. I just always thought that’s where I should go.”

During her time at Christian College, Hawkins formed close bonds with dean of women Elizabeth Kirkman and faculty members such as Hazel Kennedy and Polly and Jack Batterson. She first met her husband, Van — a student at MU — when he served as her waiter in the dining hall.

The vice president of Missouri Hall, Hawkins and her housemates would try to think up ways to slip out for a night on the town once the security detail had finished its rounds.

“We never really did sneak out,” Hawkins said. “Or I didn’t, anyway. I never had the nerve. We used to plot and scheme, though. Like, ‘Oh, maybe we can get past the Pinkerton man.’”

Hawkins has vivid memories of the fun and camaraderie she enjoyed at Christian College. She even has a paper trail to help guide her recollections, thanks to a mandatory practice she used to loathe as a student.

You see, Christian College students had to fill out index cards including information on where they were going and who they were going with whenever they headed off campus.

“I just thought that was awful that we had to do that,” Hawkins said. “But I saved all those index cards, and now it’s really great. I occasionally look back at those, and it’s a complete two-year diary of what I did every time I left campus. That’s a great memory for me.”

Hawkins, who received the Columbia College Alumni Association’s Distinguished Alumni Award in 1989, continues working to preserve the memories of some of Arkansas’ most historically significant sites.

The first project she oversaw was the restoration of the Hemingway-Pfeiffer Museum in Piggott, the family home of novelist Ernest Hemingway’s second wife, Pauline Pfeiffer, at which Hemingway was a frequent visitor. The project also resulted in Hawkins’ book, Unbelievable Happiness and Final Sorrow: The Hemingway-Pfeiffer Marriage. After several additional heritage site restorations, her most recent project — the Johnny Cash Boyhood Home — opened in 2014 in Dyess.

Before undertaking the project, she would drive by the country singer’s childhood home and see how it had fallen into a state of disrepair. She worried that tourists were getting the wrong idea about Cash’s upbringing, which took place in a New Deal resettlement colony for farmers. 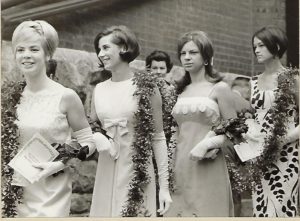 “He lived in that house when it was brand new. So, for Johnny Cash and his family, it was a palace,” Hawkins said. “His mother sat on the floor and cried the day they moved in because it was the first new house she’d ever lived in. She kept it spotless.”

Hawkins’ team restored the house and a nearby colont administration building to their 1930s form, along with rebuilding a 1940s theater as a visitors center. This October, they’re planning the inaugural Johnny Cash Heritage Festival, headlined by music performances from artists such as Kris Kristofferson and Cash’s eldest daughter, Rosanne, in the field by the house.

She still makes time to come back to Columbia every now and then. She still stops by the campus.

If the memories ever fade, the preservationist always has her notecards for reference.

“When I think of Christian, I think of the all-night study sessions with the group of girls in the alcove at the end of the hall,” Hawkins said. “And just doing things together, celebrating each other’s successes.”