Cougar athletics back in action for fall sports season 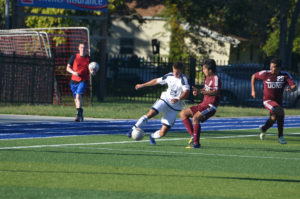 Coming off a berth in the NAIA quarterfinals the year before and returning most of their core contributors, the Cougars earned a No. 7 preseason ranking nationally. But they got off to a slow start, losing their first four matches before coming back to win the American Midwest Conference Tournament title. They bowed out in the first round of the NAIA Tournament.

“It’s a good spot for this team,” Klein said. “There’s a lot of new pieces that are very strong that, once everybody figures out how to play together, this is a group that could go pretty far. It will certainly compete for the top of the conference.”

The Cougars’ volleyball team, which won the 2015 national championship, followed that with a berth in the NAIA quarterfinals last year and is ranked No. 8 heading into this season. The men’s cross country team is coming off a conference championship, and freshman Naomi Payne won the individual AMC title for the women.

The women’s soccer team, which Klein also coaches, posted the best finish of its five-year history, going 19-2-3 on the season and advancing to the national quarterfinals. The Cougars logged 19 shutouts last year and averaged 3.96 goals per game. Leading scorers Laurie Frew, Kelsey Mirts, Lucy Kingsley and Molly Klein all return to this year’s squad, which is ranked No. 9 nationally heading into the season.

“They all bring something different to the table. Frew is the leader. She’s the senior. She’s just the best soccer player we have. She’s so clean on the ball,” John Klein said. “It’s good to have all four of those girls. Then we’ve added a couple more that will be dangerous as well.”

Klein was encouraged by both teams’ performances in a preseason scrimmage against Division-II Truman State. The women tied the Bulldogs, 1-1, and Michael Mayberry scored the lone goal for the men on a header.

Klein feels that with returners such as Mayberry, last year’s leading scorer, and newcomers such as 6-foot-4 goalkeeper Nicolau Neto, the Cougars’ men’s team can surprise some people this year.

See below for more information on all of the Cougars’ fall sports:

29: Straight seasons in which the Columbia College women’s volleyball team has won 30 or more matches.

2: Times senior outside hitter Peiyi Liu has been named an NAIA first-team All-American.

7: Different countries represented on this year’s roster — Brazil, China, Colombia, the Dominican Republic, Germany, the Netherlands and the United States.

14: Newcomers on this year’s roster.

12: Streak of matches without recording a loss last season, from Oct. 1 through Nov. 29, a program record.

50: Combined goals between forwards Kelsey Mirts (15) and Laurie Frew (14) and midfielders Lucy Kinglsey (11) and Molly Klein (10) last season. All are back this year.

9: Players on this year’s roster from Columbia or Jefferson City.

2: Conference champions last year — Naomi Payne and Malik Holman — who also both earned AMC Runner of the Year and AMC Freshman of the Year honors.

22: AMC All-Conference runners on the men’s cross country team since 2012.

5: Freshman runners on the women’s roster — half of the team.