The entrepreneurial spirit has always been an integral part of Becky Bocklage’s life. 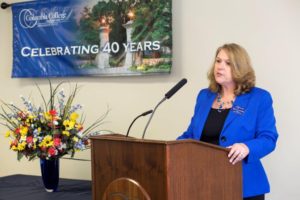 Becky Bocklage, the new director of Columbia College’s Fishman Center for Entrepreneurship, has taught at the college since 1999 and became the Columbia College-Jefferson City director in 2010.
(Photo by Kaci Smart)

In high school, she spent summers helping run the store that her parents owned. After graduation, she got in on the ground floor of a lease brokerage firm. She earned two Bachelor of Science degrees from Missouri State University — one in management with an emphasis in entrepreneurship and one in marketing with an emphasis in advertising and promotions.

“I have that entrepreneurial spirit, so I like to look for new challenges,” Bocklage said.

It’s fitting, then, that her latest challenge brought her from the Jefferson City location to Columbia College’s main campus, where she started as the director for the Fishman Center for Entrepreneurship at the beginning of June.

She said it was a difficult decision to leave the faculty, staff and students she had come to view as a second family in Jefferson City for the past 18 years. But Bocklage knows better than most that is rarely easy to take the bold steps that are key characteristics of the entrepreneurial mindset.

“This is really, for me, an entrepreneurial adventure, as we figure out how to serve these folks the best and provide programs that are impactful and important to them,” Bocklage said. “That’s fun to me. I look forward to having students return from summer break and getting started on our programs.”

When Bocklage first started college, she was majoring in elementary education. Specifically, she was training to teach computer classes to elementary school students.

That was before she got recruited to help start a new lease brokerage firm, a process that included a trip to Chicago to learn the ropes of the business.

“We went there, and I remember getting so excited. It was like it tripped a switch in me,” Bocklage said. “So I got back in college, but I changed my major. My goal was to own my own business and know how to market it. So I started to build my own strategy at that point.”

That strategy included teaching marketing, entrepreneurship and management classes to Columbia College students, both at the Jefferson City location and through the Online Education program.

When the School of Business Administration’s Fishman Center director position came open in the spring, it was a perfect match for Bocklage’s backgrounds in education and business, as well as her affinity for Columbia College.

Even though she’s serving in a leadership capacity, she’ll still get to teach courses as a half-time faculty member in the School of Business Administration.

“My vision for Fishman Center is that we support the Columbia College students and community in their entrepreneurial endeavors,” Bocklage said. “That doesn’t necessarily mean new ventures. It could mean that we’re just trying to develop some of the traits of individuals who would be entrepreneurs, opportunity seekers, problem solvers. They’re creative and innovative, and those are all talents and skills I’d like to be helpful in developing in our community.”

Over the past two months, Bocklage has been getting all the input she can from School of Business Administration Dean Shanda Davis and the department’s faculty members as far as what programs have worked in the past — such as the Fishman Center’s Student Entrepreneur Showcase Pitch Competition — and what directions would be beneficial for the future. She plans to draw on even more input from instructors, staff and students as the 2017 Fall Semester starts August 28.

Bocklage says it’s an exciting time to be a part of the Columbia College School of Business Administration. It’s a time of expansion in educational programs, student population and physical space, with the announcement of the new home for the school in the academic and residence hall slated to be completed in August 2019.

That’s what you do with new ventures. You put in the effort and ingenuity, then watch as they grow.

“I’m just trying to listen to everyone and learn what’s important to them, what we should be doing, what our leadership would like for us to be doing and what our impact should be,” Bocklage said. “I want to maximize the impact of the Fishman Center.”