Pitching for a cause 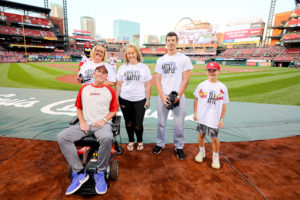 Keith (front) and Jacob Venneman (third from left) and their family stand on the field at Busch Stadium after Jacob, a Columbia College pitcher, threw out the first pitch of a St. Louis Cardinals game Sept. 8.
(Photo by Ben Munson/St. Louis Cardinals)

Keith and Jacob Venneman have always been able to bond over baseball.

“That’s our life,” Jacob said. “Our special connection was baseball. We did that every day throughout the year.”

Cougars baseball coach Darren Munns interjected that, if you ask Keith, he says he could still hit a home run off of Jacob anytime.

“He always said that,” Jacob confirmed, with a grin.

Last year, Keith was diagnosed with amyotrophic lateral sclerosis (ALS), a disease that causes the extinguishing of motor neurons that control the body’s voluntary muscles. It is more commonly known as “Lou Gehrig’s disease,” named after the New York Yankees Hall of Famer who was diagnosed with ALS during his playing career, in 1939.

As the disease progresses, its victims lose muscle functionality. Keith can’t walk on his own. He needs help with everyday activities. He must be monitored all hours of the day.

“It’s been a rollercoaster, just a bunch of different emotions,” Jacob said. “Every day, something new happens. It’s a journey that we’re all going through, and we’re all adapting and adjusting to new things.”

On September 8, before the St. Louis Cardinals’ home game against the Pittsburgh Pirates, Keith got to watch his son take the mound at Busch Stadium and throw out the first pitch. Jacob, his mother, father and younger brother and sister all took in the moment.

Keith wore a Cardinals shirt. The rest wore shirts that said “Keith’s Battle is My Battle,” with a blue-and-white ALS awareness ribbon.

“Really, it’s just the opportunity of a lifetime. This doesn’t happen every day,” Jacob said. “I’m really just doing this for my dad and family, just to make him happy. I just want everyone to enjoy the moment.”

Jacob says he didn’t know much about ALS before his father’s diagnosis. Since then, he and his family have learned, firsthand, about the debilitating effects of the disease.

He was devastated when his mother first told him. But he has learned that he has to be strong.

“As I grew a little bit, matured a little bit, I realized that, being the oldest kid in the house, I had to step up,” Jacob said. “I’m trying to be very supportive of my younger sister and younger brother, and especially my mom, because she does everything for me. And I know it’s very hard on them. So I’m trying to keep a positive head about it and keep my composure through the whole process.”

His teammates and coaches have been supportive, yet still want to value the privacy of Jacob and his family. The O’Fallon community held a trivia night fundraiser for the Vennemans last March, and Munns and assistant coach Craig McAndrews made the 85-mile drive down from Hannibal after the Cougars finished a three-game sweep of Hannibal-LaGrange University. 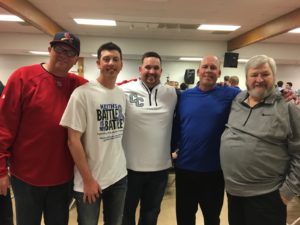 That success didn’t extend to the trivia. McAndrews said he doesn’t think they got many questions right. That wasn’t really the point, anyway.

“I think he’d do the same thing. With our program, it’s how tight we are. It’s all for one,” McAndrews said. “It’s nice to have that tight-knit group. It didn’t even feel like we were doing anything. That’s just part of it, what you do as a team.”

Jacob says he is grateful to have the built-in support structure with the Columbia College baseball team. In addition to pitching in seven games for the American Midwest Conference regular-season champion Cougars in the spring, Jacob also earned a spot on the AMC All-Academic team. He is studying business finance.

It would be one thing to handle such a delicate family matter and your schoolwork if you were an upperclassman, Munns said. The fact that Jacob did it during his first year of college was especially impressive.

“One of our team initiatives is ‘family is first.’ We don’t just talk about it, we live it,” Munns said. “Whatever he needs off the field, we’re here for him. Baseball is secondary to life. You have to keep that in perspective, and we do.” 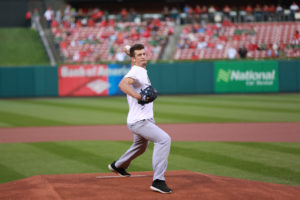 After the first pitch and the photos on the field, about 15 members of the Venneman family took in a 4-1 Cardinals win from a private suite. Keith and Jacob, being the lifelong Cardinals fans that they are, always watched the Cardinals on television, but they saved trips to the ballpark for special occasions.

Jacob couldn’t imagine a much more special occasion than a father watching his son throw off the mound at Busch Stadium.