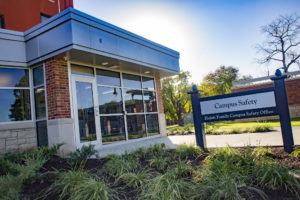 The Hulett Family Campus Safety Office sits in the heart of campus on the Quad.
(Photo by Kaci Smart)

Director of Campus Safety Bob Klausmeyer stood at the front of Dorsey Gym, preparing to educate a group of about 30 Columbia College students on the importance of ensuring their personal safety.

He stopped short of being their sensei.

“I’m not here to teach you karate or anything like that,” Klausmeyer said. “That’s not my forte.”

Klausmeyer was there to provide safety tips to students as part of Safety Night with Student Government Association on September 5. He introduced himself and the rest of the Campus Safety officers who patrol the main campus in Columbia, Missouri, and help keep its students, faculty and staff safe and comfortable with their surroundings.

SGA President Daymond Dollens said the event, part of Columbia College’s programming for National Campus Safety Awareness Month in September, was meant to inform attendees of all the resources available to them on campus.

“For a lot of students, this is kind of a new area,” said Dollens, a junior. “We want to make sure they know who the Campus Safety officers are, what Campus Safety can do, all the different safety precautions they can take on campus. We have a longstanding record of being a safe campus, and we want to continue that. Part of that is making sure our students are aware of the different safety precautions they can take.”

The most anticipated part of the evening, of course, was the self-defense training.

The students arranged themselves in a circle as Klausmeyer demonstrated ways to knee or jab a would-be attacker to create a momentary distraction and window for escape. He had fellow Campus Safety officer Will Nichols put him in chokeholds and wrist holds, then showed the students ways to break out of them.

After the students practiced on each other, Klausmeyer and Nichols picked up pads and allowed the students to rain knees and punches down on them.

“Do it at about 20 percent. Don’t go the full 100 percent on anybody,” Klausmeyer said. “And don’t choke out your roommate. I don’t want to get any reports about that.”

The goal is to recognize the signs of a potentially dangerous situation and steer clear of it. If that’s impossible, the goal is to figure out a way to extricate yourself from the situation as soon and as safely as possible.

And, if you should find yourself in trouble on campus, a Campus Safety officer is only a phone call away at (573) 875-7315. Klausmeyer and his staff have made efforts to be a more visible presence for Columbia College students in tandem with the new Hulett Family Campus Safety Office going up on the Quad before last school year.

Lauren Lagemann, a junior and the SGA vice president of administration, said she and some friends were running through Alumni Fountain shortly after the start of school last year when an officer approached them.

She thought they were in trouble. Instead, the officer offered to take a picture for them.

“They’re there to help you, even if you just want to talk to them,” Lagemann said. “They’re really there to make sure your college experience is more enjoyable and safe.”

Throughout the month of September, the Campus Safety staff has been offering safety tips to the campus community through methods such as social media, printed materials and announcements on campus television screens.

“When students can feel safe on campus, then they can be successful in the other aspects,” Dollens said. “We have a great record of that. We’ve been named the safest campus in Missouri, and that’s a good thing to carry, that reputation.”