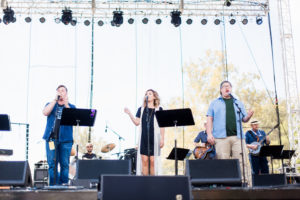 Laura Rowe and Logan Moore have been singing together for nearly a decade, starting from when their junior high choir programs merged, through their time at Hickman High School and into their senior year Columbia College.

They have performed in a number of prestigious settings — New York City’s Carnegie Hall comes to mind — but have never gotten a showcase for their range as musicians quite like the one they experienced in their hometown on Oct. 1, at the Roots N Blues N BBQ Festival in Columbia’s Stephens Lake Park.

Roots N Blues, an annual event, brings rock, blues, soul, country and roots music acts from all over the country to Columbia for three days of performances. This year, one of the 33 groups to perform was “Broadway Blues,” a collection of 10 artists affiliated through the Broadway Christian Church in Columbia.

Moore has performed with Broadway Blues at the festival for the past three years. For Rowe and Moore’s younger brother, Carter — a Columbia College sophomore — this year was their debut.

They took the Great Southern Bank Stage for a 45-minute set at 11:30 a.m. on a Sunday, with a couple hundred people watching.

“It’s a music festival, so no one’s interested in coming up super close to the stage. Everyone kind of found a shady spot,” Rowe said. “A lot of our family and close friends came down into the pit area, and they got to be right in front of us. They also have a video projection, so they’re filming it and it’s up on the big screen next to the stage, too.”

Rowe said events such as Roots N Blues show the openness that Nollie Moore — Logan and Carter’s father — encourages as head of the Columbia College Music program, as well as the versatility of his students. Other music schools tend to silo vocalists into their specialties, whether it be theater, opera, classical or other genres.

Moore doesn’t mind if his students stray from their disciplines to other ventures, such as garage rock bands or, in this case, music festival performances.

“My parents always joke, ‘Oh, you sang something we recognize!’ That’s a fun experience, to do something a little bit different,” Rowe said. “It just shows what a great place it would be to come to Columbia College if you have multiple interests. It just says a lot about our program and the willingness our program has to see students succeed.”

The Roots N Blues set mixed in folk, soft rock, bluegrass and some contemporary Christian. In Rowe’s words, “feel-good, uptempo stuff.” There were two instrumental pieces in which the guitars, mandolin violin and piano got to strut their stuff, along with a five-piece vocal harmony on Leonard Cohen’s “Hallelujah,” a song for all the female singers and a duet between Logan and Carter.

Rowe even had her own solo piece: the Audrey Assad ballad “Restless,” with Carter providing background vocals.

“We’re always playing around, joking, never serious with each other. Then you get on stage, it’s like we can’t even look at each other without laughing, just because that’s our relationship,” Rowe said. “So to get on stage and both understand how much that song meant to us and how important that moment was, to be able to look at each other and not laugh, just to feel that energy and how cool that was between us, that was definitely the highlight.”

Rowe took an unorthodox path to the Columbia College Music program. She started at nearby William Woods University as a golfer and science major before deciding she needed a change. She came back home to study science at Columbia College and, in her first semester, Moore talked her into taking voice lessons. A couple of weeks later, she sang theater at a competition and placed second.

She’s set to earn her music degree, with a vocal performance concentration, in December. From there, she plans on continuing to run her photography business, but music will always play a significant part in her life.

A passion she rediscovered at her hometown college.

“When people are looking for colleges, they think you have to go so far away to find something cool,” Rowe said. “You really don’t, if people would just invest in looking at what’s around them.”

Check out below for a photo gallery from Rowe and the Moore brothers’ performance at Roots N Blues. 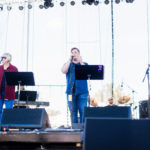 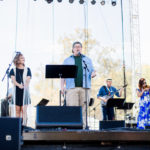 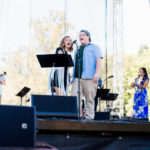 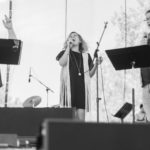 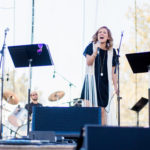 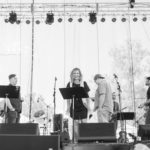