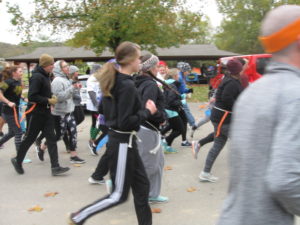 Saturday, October 28 was a chilly morning, however it was perfect weather for a Zombie 5K Walk/Run.

Columbia College–Fort Leonard Wood hosted the fifth annual zombie 5K event at Waynesville Park, which is located in downtown Waynesville, Missouri. The event was held at 11 a.m. and continued until 1 p.m. on a brisk Saturday.

There were more than 90 participants in the race, not including the supporters and volunteer zombies. Participants took part in the five-kilometer fun run, while being chased by “zombies.” The run included water stations and arrows directing runners over the course. During the zombie 5K, there were more than 20 volunteer “zombies” who participated, with the zombies dressed in distressed clothing and makeup. Everyone enjoyed taking part in the event.

The proceeds will be donated to the Janet’s Wish foundation and the Little Heroes Playground in Waynesville. Janet’s Wish is a nonprofit organization, founded in Waynesville, which provides services and items to individuals that are in hospice with terminal illnesses. The Little Heroes Playground is in the Waynesville City Park and is currently being constructed. When it is completed, the playground will provide a wheelchair-accessible playground for children.

After the fun run, the college staff and students hosted the annual Community Trunk or Treat in the park. More than 400 children attended the event. Fifteen businesses and individuals decorated their vehicles for Halloween. The children visited each vehicle and received treats. During the event, the children and parents voted on the best vehicle decorations. Certificates were awarded for the scariest, cutest, most festive and most creative.

Columbia College–Fort Leonard Wood would like to thank all who contributed for the Zombie 5K Walk/Run and the Trunk or Treat. We will be posting about the next event coming up shortly and hope to see everyone there!

Check out below for more photos from the event: 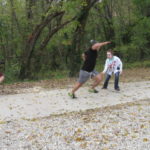 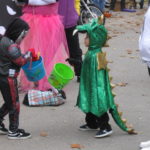 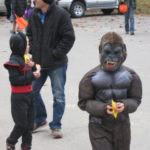